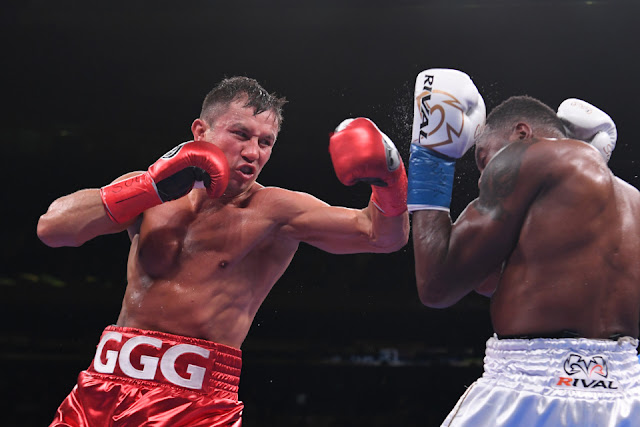 Gennady Golovkin shows he still has ti with an epic fourth-round knockout of Steve Rolls. There's only one name he is thinking of right now: Canelo Alvarez

It was the 37-year-old's first fight in nine months after suffering the first loss of his career at the hands of Canelo. The Kazakhstan fighter hopes the third time will finally be the charm.

"I feel great, I feel like a new baby," Golovkin said.

Everyone's mind was on a possible upset after Andy Ruiz upset Anthony Joshua despite not looking the part. Ruiz also went home with three titles that night.

Rolls performed like he was there to upset. He was landing good shots on Golovkin and was playing well as the two counterpunched each other.

Golovkin patiently studied his opponent until he saw holes in Rolls' defense. That was when he unloaded in the fourth round.

Unfortunately for the Canadian, Golovkin was just waiting for the right moment as he hit Rolls with a short left sending Rolls face first to the canvas.

Golovkin did not hesitate to call out who he wants to fight next. "Everybody knows. I am ready for Canelo. Just bring him, ask him. If you want a big drama show, tell him," Golovkin said in his post-fight interview.

The Russian signed a lucrative six-fight deal with US streaming company DAZN which both Canelo and Joshua are also under.

With the shock of the Joshia-Ruiz bout, it is most likely DAZN will lose some subscriptions unless they agree to match the two DAZN fighters Canelo and Golovkin.

This was his first fight with new trainer Johnathon Banks after splitting with long-time trainer Abel Sanchez over financial disputes.

GGG he hopes this is indeed a new beginning for his career.

"I come back to my knockout ways," he said.


Will the inevitable Canelo vs GGG III happen? When will a deal be signed? Let us know your thoughts on this potential trilogy.