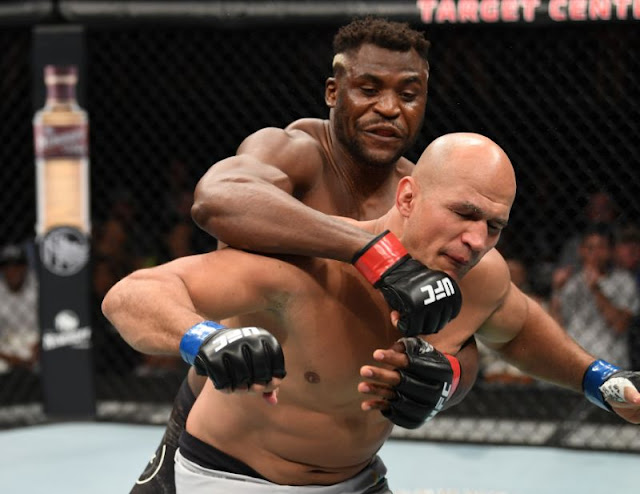 Never try to stand toe-to-toe with a man with homing missiles for hands. Former UFC heavyweight champion Junior Dos Santos found that out the hard way.

Francis Ngannou added another casualty to his list as he knocked out Dos Santos in 71 seconds Saturday at the Target Center in Minneapolis, Minnesota.

Two of the UFC’s best heavyweight boxers knew that only one needed to connect and it's all over.

Ngannou was the one who did.

Ngannou has mastered the art of timing since he likes putting his entire body weight behind a punch. A lot of heavyweights do that by Ngannou is one of the few that mastered it.

Dos Santos is usually more technical with committing but this time he overcommitted and it cost him. He attempted to move away from Ngannou to reset but it was too late.
Ngannou threw a right hand while Dos Santos was turning back and it landed on the chin. He followed up with some more power shots which sent the former champion turtling up.

The quick finish should earn him a title shot in the future regardless of who wins the Cormier vs Miocic rematch.

Heavyweight Champion Daniel Cormier will defend the belt on Aug. 17 in a rematch with former champion Stipe Miocic. Though Cormier has hinted on retirement, a match against Ngannou is something we have to see happen.

Miocic defeated Ngannou via unanimous decision last January. This sets up a rematch if Miocic wins this August.

Ngannou has chopped down everybody bound to get a title shot and he did it fast. He managed to knock out Curtis Blaydes, Cain Velasquez and Dos Santos in a combined time of 2:22 in his last three fights.

Ngannou asks for a title shot

“The only thing left is the winner of Stipe and DC,” Ngannou said.

The heavy handed Ngannou is easily the most intimidating fighter in MMA today. On top of his 6'4, 250 lb frame, even the best fighters in the division fall to his heavy hands.

The scary part is that he is still getting better at the age of 32.

Where does the lates win rank in the list of Francis Ngannou knock outs? Let us know in the comments section below.