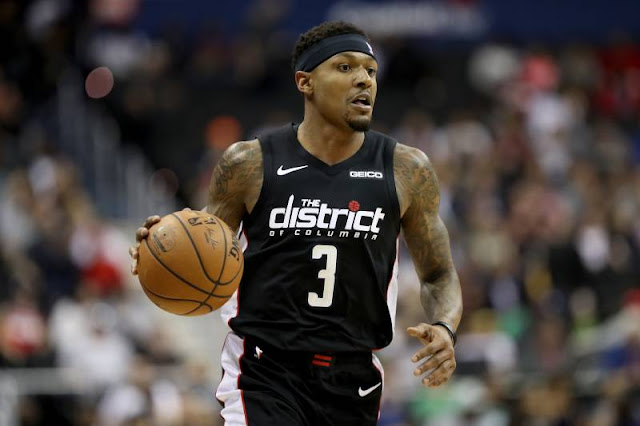 The Boston Celtics are already preparing for the departure of a certain scoring guard.

Washington Wizards guard Bradley Beal is reportedly a 'prime option' for Celtics this offseason. The move might be a Plan B after missing out on a possible Anthony Davis trade.

Celtics  president of basketball operations Danny Ainge might be in hot pursuit.

Beal is a prime option as the team needs an explosive scorer, one that could more or less cover for what Kyrie Irving used to produce for them.

If Irving leaves in free agency, the Celtics will definitely make sure this deal happens.

One league source suggested that Washington would want Jayson Tatum, Marcus Smart and a protected pick if they are sending Beal to Boston. An alternative one would be Smart, Jaylen Brown and two future first-rounders as an alternative trade.

The Celtics might focus on sweetening up the latter.

Why Beal will be a good fit in Boston

Beal is fairly young enough to relate to the Celtics' youth-filled roster. He will only turn 26 this month.

He is consistent with his production as he became the Wizards' undeniable go-to guy when  John Wall struggled to be.

Beal exploded to a bonafide All Star caliber player three seasons ago and has averaged at least 22 points in each of season since.

The best part is that Beal is actually entering his prime. Beal also brings his two-time All-Star credentials to the team.

Pairing him up with Tatum will be very interesting but the Celtics are reportedly willing to land a bigger star. He was reportedly put in the mix during the talks surrounding a possible trade for Davis.

Why this is a good idea

Beal has two years remaining on his five-year deal with Washington. That is more than enough time to decide if he really wants to be a Celtic for the long haul shall he play there.

He is set to make $27.1 million next season which is around the same ballpark as what the Celtics were paying Irving. Cap room will not be an issue at the moment.

It is clear that the Wizards are no longer John Wall's team which is why the team will surely not trade Beal for less.

Will the Washington Wizards agree to trade Bradley Beal to the Boston Celtics? Who will they want in return? Comment down below your thoughts on this possible trade.