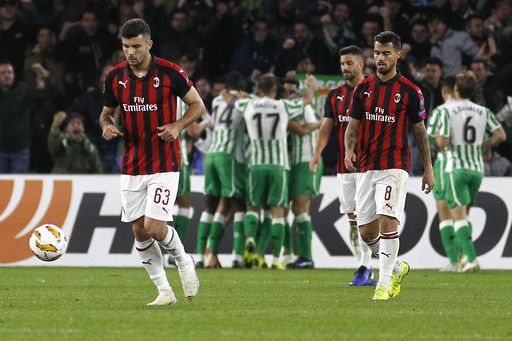 AC Milan decided that it's time to fix some of its issues as they withdraw from next season's Europa League. The move comes after issues of breaches in UEFA's financial fair play system.

The Court of Arbitration for Sport approved of the move on Friday.

Milan was already fined by UEFA for 12 million euros ($13.5 million) of Europa League prize money in the case. It includes a ruling by the Court of Arbitration for Sport to overturn a ban from last season's Europa League.

CAS said it will invite UEFA's cub financial control body ''to issue a procedural order acknowledging the outcome of the present arbitration(s) and terminating the proceedings relating to the 2016/2017/2018 monitoring period, which have become moot.''

The club decided to withdraw in the hopes of a clean slate as their finances are being monitored.

Despite AC Milan's winning history, they struggled to qualify for the Champions League for the past six years thus, causing their finances to takea hit.

While Milan's finances now will not formally be examined by UEFA next season, the Rossoneri's books will still come under scrutiny as soon as they qualify for Europe again.

The club is sacrificing a lot in exchange of a clean slate.

The list of losses include a possible payout of 15 million euros from UEFA, around 50 million euros for winning, and the  likelihood of selling some of its top players.

Milan said in a statement that the Europa League withdrawal ''will act as a stimulus to maximize the efforts to become fully compliant with FFP, while at the same time consolidating the competitiveness of the club, and returning AC Milan to sustainability and a more positive future.''

Another tie to strenghten is its relationship with  the club's new CEO Ivan Gazidis. Gazidis had to forfeit his seat on the UEFA executive committee just to be Milan's top executive.

Milan missed out on the Champions League for the sixth straight year after finishing fifth in Serie A last month. The club missed out on places by one point, the most painful type of losing.

With Milan's withdrawal, Roma will get a chance to enter the group phase of the Europa League. UEFA has made no immediate announcement about it at the moment.

Roma  finished sixth in Serie A. The club will be slated to play Europa League qualifying beginning in late July.

Torino, which finished seventh, will take Roma's spot in the qualifying rounds.

Did AC Milan make the right move? Will they bounce back strong next season? Tell us your thoughts on the comments below.