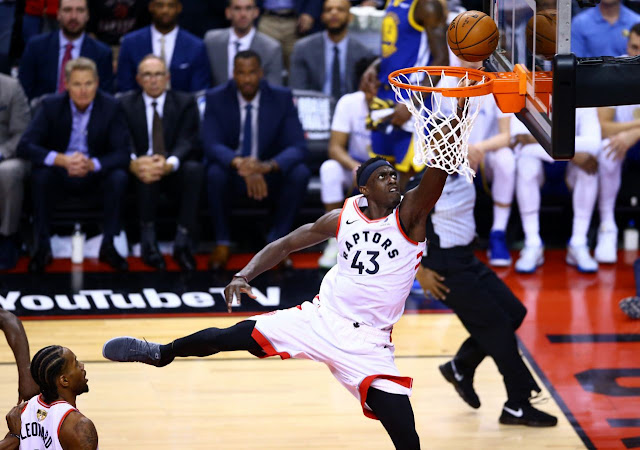 The cold weather of Toronto might have been the cryotherapy for the less-rested Raptors.

Rust was somehow evident in game 1 of the NBA Finals.

Raptors get another big game from Siakam

Pascal Siakam is definitely going to win Most Improved Player and he showed just why. The breakout forward had a monster game with 32 points, eight rebounds and five assists.

His timing couldn't have been any better with Kawhi Leonard struggling after carrying the Raptors for the entire playoffs. The Raptors were also active on defense as they slowed down the Warriors in transition.

Siakam has had a lot of big games for the Raptors but he simply showed dominance in his NBA Finals debut.

Golden State closed the gap with their expected reliance on the 3-point line. They managed to cut a 10-point deficit to 3 as the Raptors' stars rested.

The Raptors fought back with two unanswered buckets which forced the Warriors into a timeout.

Toronto maintained control of the rest of the game.

DeMarcus Cousins made his return but did not make much impact too in his limited bench role. He finished the game with only three points in eight minutes.

No other Warriors scored in double figures.

The Raptors made a collective team effort behind Siakam's monster game.


Leonard ended up with Leonard picked up his game after an eight-point first half to finish with 23 points, eight rebounds and five assists, Marc Gasol added 20 points and seven rebounds, while Danny Green chipped in 11 points.

Reserve guard Fred VanVleet was hot shooting  5-of-8  rom the field. He finished the with 15 points as


Starting guard Kyle Lowry made only seven points but made up with nine assists and six rebounds while doing an impressive job on defense.


Will Raptors score another in their next home game? Will the Warriors prepare this time? Let us know which team you are picking.