Free Agency rumors: Where are the stars heading? 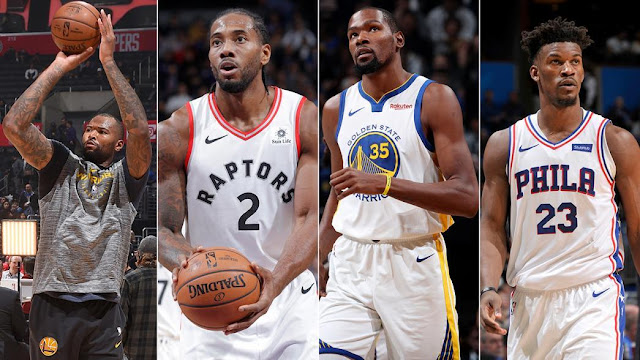 We are in the second round of the NBA playoffs and its results hold a huge bearing on where these marquee free agents will go.

Loyalty gets thrown out the table once checks, and championships start to weigh more on an aging superstar. People leaving for greener pastures isn’t something new in the NBA.

Even the best wants better especially when critics start to get into their heads. Here are some of the big names that are bound for free agency:

Many believe that Kyrie Irving has checked out of Boston at 0:00 in the third quarter of game 5 against the Milwaukee Bucks. The Bucks won the series 4-1 in another blowout.

Kyrie to NY, Kyrie to LA, and even the slim chance of go back to the Celtics are all being talked about as possibilities.

Analysts have been critical of how Irving was hurting the Celtics’ young locker room. Incidentally, the team managed to go deeper into the playoffs last year with him out with an injury.

Irving sent out a public apology to Lebron James months back which implies a potential interest in reuniting with his former teammate in Los Angeles. With the Lakers’ culture being infested by hard-headed youth, James definitely needs some familiar backup, particularly one he has won a championship with.

The New York Knicks is an interesting choice. The team lacks offensive firepower in the point guard position. But with two possible arrivals (one super rookie and one superstar), it also might be a bad idea.

Kevin Durant is that superstar we mentioned that might actually go to New York.

The upcoming free agent scoring machine has had a love-hate relationship with his Golden State Warriors teammates since the start of the season.

The Knicks have been preparing for this scenario already by unloading some of its cap space. They already shipped Kristaps Porzingis to Dallas for affordable pieces. The team can even sign two superstars should they want to.

Now the problem lies that there is a huge chance they land a super rookie in Zion Williamson. The consensus no. overall pick in this year’s draft is the lock-in choice of the Knicks shall they win the draft lottery this June.

Now back to KD, he obviously lifts up any team he plays with with his proficient offense. His impressive defensive play has also shown since joining the Warriors.

He was able to turn Golden State into his show and it won’t make a difference if he flies to the Eastern Conference. He may not have a Stephen Curry or a Klay Thompson-type shooter in New York but the fact that KD’s offensive game overshadows the two, it’s only going to stand out once he is a Knickerbocker.

If there is somebody strongly rumored to be heading for LA, it’s definitely the Klaw.

Kawhi Leonard wanted to be traded to the Lakers when he was having a meltdown as a member of the San Antonio Spurs. Even with his professionalism in Toronto, signs still point in him wanting to play with Lebron in LA.

He bought a mansion in Los Angeles (which is a sign for players moving), he isn’t mum about wanting to play in California, and he is still an upcoming a free agent regardless of how far the Toronto Raptors go in the playoffs.

James is the man people want to play with especially as they see the Lakers crumble due to their youth. The team has a ton on cap room even with James’ contract. One enough to sign a Kawhi Leonard-type deal.

But after winning the series for the Raptors, the team will have a strong case for trying to re-sign him. That's if loyalty is still a thing up north.

Jimmy Butler's competitive nature uplifts like minds. It has brought out a winning attitude in Joel Embiid and probably reminded Ben Simmons that this isn't college.

Even with the Sixers' dramatic second round exit at the hands of Kawhi Leonard and the Toronto Raptors, Philly seems like the perfect fit for a guy like Butler.

His winning mentality may rub nonchalant all stars the wrong way but creates a powerful lineup when they want to win.

He definitely fills a need in Los Angeles but the best option for him is to stay in Philadelphia and bounce back next season.

Splash Brothers are starting to get overshadowed in Golden State. It might go back to normal depending on where a certain KD is heading.

Klay Thompson has made cryptic posts on social media indicating how he will miss the Oracle Arena. He hasn't made any intention clear though of where he is heading.

Thompson likes to play in Golden State but it seems like he like more money as well. Sharpshooters aren't really offered a lot but Klay is on a different level of sniping.

His scoring prowess will be useful for teams in dire need of one. We have been overusing the Los Angeles Lakers in this article but almost every marquee free agent including Thompson.

The Warriors won a championship without KD. It wouldn't be a surprise if they let him walk and give Klay what he deserves.

There is a reason Boogie is still a bigger asset than a liability. Demarcus Cousins is extremely talented.

He is strong, unselfish, has a high basketball IQ, and takes the game so seriously that he even overinvests emotions into it at times. Even with the Pelicans, he outperformed Anthony Davis when the two played together inside the court.

No team wanted to sign Cousins in free agency last year to which he had no choice but to take an extremely low pay for one year with the Golden State Warriors.

Cousins wasn't able to play most of the regular season but performed impressively when he started to. His stats were still his usual despite having Durant, Curry, Thompson, and Draymond Green in the linup.

Again, he could have been another perfect fit for the Lakers and now may be the chance for that in his upcoming free agency.

Boogie to LA should be at the top of LeBron James' priorities if he wants to go further as part of the team.

Literally nobody gives Tobias Harris credit for anything but it's time we do. He's been playing like a legitimate star ever since he broke out as a primary option for the Orlando Magic in 2013.

He never made All Star, never has a talented scorer been thrown in trades since Jimmy Jackson, and he actually was carrying the LA Clippers before they traded him to Philadelphia.

Now is the time for Tobias Harris to demand his worth. A bunch of small teams would be interested in throwing their money on a player that will surely deliver.

Being a member of a loaded 76ers team didn't hurt his performance. Maybe he and Butler can stay for a few more and bounce back next season?

Who else did we miss out on? Do you want to see familiar faces in new places? Or should they stay and try to go further next season?