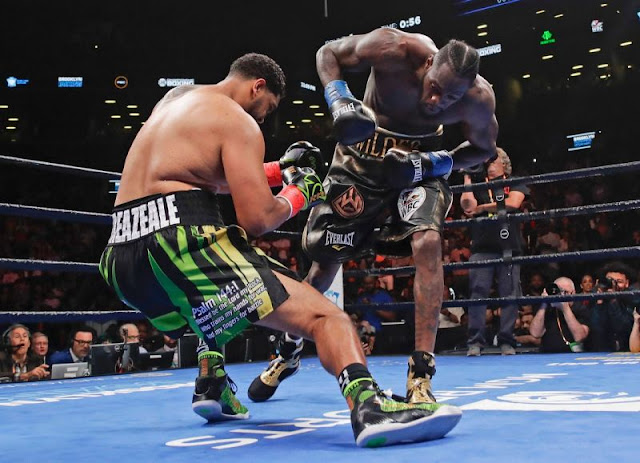 Deontay Wilder should be getting more attention and he just reminded everyone why.
The WBC heavyweight champion stayed undefeated after landing a short right cross on the chin of Dominic Breazeale finishing him in the middle of the ring at the Barclays Center on Saturday.

Wilder used some range as he set up the finishing right with a measuring jab. He then fired a short right upon which Breazeale went down hard on his back and couldn’t beat referee Harvey Dock’s 10-count.

The fight was over at the 2:17 mark of the first round. Wilder scores his 40th knockout and improves to 41-0-1 with the finish.

Wilder had said in the pre-fight build-up that he wanted to kill Breazeale. He may have not done it literally but he made sure the result was close to what he wanted.

“Everything just came out of me tonight,” Wilder said.

Both Wilder and Breazeale hated each other. There was a lot of animosity during the pre-fight buildup. They reminded boxing fans why the heavyweight division used to be so great.

The champ is smart enough to know how to sell tickets and PPV buys. He made sure the trash talk ends the moment the fight ends.

"I just told Breazeale I love him and of course I wanted to see him go home to his family. I know we say some things we mean sometimes, but then when you get into a fight and you settle your differences as men and you hold these gloves, this is what the sport is all about," Wilder explains.

Wilder has two options: a rematch with Tyson Fury or a unification bout with Anthony Joshua.

He is coming off of a draw with lineal champion Tyson Fury. Wilder is open to making the rematch with Fury happen. As for the IBF-WBA-WBO champion Anthony Joshua, he also made sure that match will happen as well.
The people want Wilder versus Joshua to finally happen but the dilemma is that Fury is more of unfinished business.
A rematch between Wilder and Fury must happen first to determine who indeed gets Joshua. This probably is the more feasible thing to do in the next few months.


Where do you rank Deontay Wilder's recent performance? Will it be Tyson Fury or Anthony Joshua? Leave a comment and let us know your thoughts.