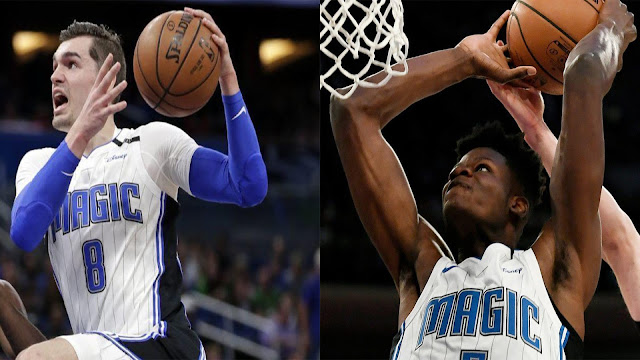 It’s been a long time since the Orlando Magic actually drafted a rookie and used him the way he is supposed to play. That year goes way back to 2005 when they used their first overall pick to draft Dwight Howard.

Howard enjoyed his best years with the Magic where we saw him develop into the player he is supposed to be. The raw, average built big man out of SW Atlanta High School transformed into a monstrous athletic version of Shaquille O’Neal (minus the titles and inividual accolades of course).

The problem however is that they weren’t able to replicate that feat even though they had all the opportunities to do so with all the top 10 draft picks that followed, it was either management, coaching, or the teammates themselves that derailed such young careers

Two of those promising prospects are Mario Hezonja and Mo Bamba. Let’s take a look at each one shall we?

He dubbed himself as “the next Kobe Bryant” but what happened to his hype?

Hezonja was drafted with the fifth overall pick in the 2015 NBA Draft. It was the time where the Magic actually had a chance to create a legitimate star.

Nikola Vucevic was doing his work but there has to be an offensive firepower to relieve him from some of the scoring load. The Magic center isn’t to be blamed here.

The name of the man responsible for derailing Hezonja’s rise is Evan Fournier.

Fornier came over to the Magic via trade after spending time as an underrated and overlooked member of the Denver Nuggets roster. His ball-dominant game on offense comes from his strengths which is outside shooting and drives.

There isn’t any problem with that unless you consider how many minutes he took away from Hezonja. The Serbian was unable to regain the confidence he once had after being benched time and time again in favor of Fournier.

We shouldn’t blame Fournier in full here but being the uncrowned second star of that Orlando Magic team, he should have suggested something good for Hezonja. If ever he did suggest something, then we put full blame on the coaches.

Hezonja is doing better in New York right now but with the imminent arrival of any of the four one-and-dones from Duke, it might not take long til Hezonja warms benches again.

Orlando was a bad place for Hezonja but it shouldn’t have been had he been given the same freedom to break into the league that was afforded to Dwight Howard.

This one is a sadder story since the Magic are missing on what could be a cross between Howard, Giannis Antetokounmpo, Joel Embiid, and Kristaps Porzingis.

Bamba was drafted the sixth overall in the 2018 NBA Draft. The lengthy center out of the University of Texas had the makings of a taller, longer, and probably more athletic Antetokounmpo.

Bringing Dwight Howard back in the discussion, it is notable that he averaged 12.0 points, 10.0 rebounds,  and 1.7 blocks in 32.6 minutes per game during his rookie season.

Bamba on the other hand averages barely half in his lone NBA season with 3.6 points, 5 rebounds, and 1.3 blocks in 16.3 minutes.

It is obvoiuls that having to play behind Vucevic, Aaron Gordon, and Jonathan Isaac is derailing his young career.

Again, coaching may be to blame but if the veterans do not give way, "Bamba" will soon turn into "Bam-Bust."

Critics have been harsh on the young 7-footer. It isn't his fault though as he needs to feel the pro leagues with the same freedom afforded to Howard.

Luka Doncic wouldn't have balled around the NBA if Dennis Smith Jr. did not accept his fate and give way.

In the case of the Magic, Hezonja already suffered and it's time they learn from that and let Bamba just play.

Unless something changes (like trading Fournier), the Magic will continue being the worst place for top prospects to land on.

WIll Mario Hezonja fully recover? How about Mo Bamba's potential? Let us know why else the Magic should change its system.