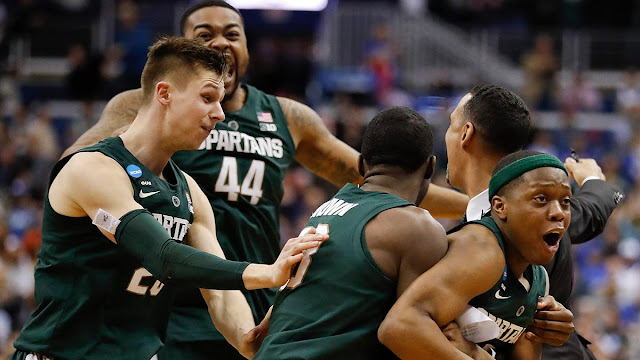 It's not like we didn't see something like this coming. The NCAA tournament probably has the most exciting upsets in sports history.

Just like what happened to Duke as they were upset by Michigan State. The Spartans beat the Blue Devils 68-67.

The upset ends Duke's dominant season, which now ends with an with an Elite Eight exit.

Zion Williamson walked off the court with his head down. RJ Barrett kept thinking where he went wrong.

Tre Jones and Cam Reddish were emotional in the locker room as they learned that there is no "sure win" in an NCAA Tournament.

None of the Blue Devils team were spared the humiliation of the upset.

We all saw it coming

Duke entered the NCAA Tournament as No. 1 overall seed. They wasted no time in wiping out No.16 North Dakota State in the Sweet Sixteen.

They barely survived against Tacko Fall's UCF. Fall was holding his own but struggled with foul trouble, which cost his team in the closing moments.

Duke won that game 77-76. UCF exposed the holes in Duke's game which Michigan State picked up and capitalized on.

Big Ten Player of the Year Cassius Winston was leading the charge for No. 2 seed Michigan State. He finished the game with a double-double scoring 20 points with 10 assists.

Matt McQuaid had his moments for the Spartans including a breakaway dunk and a  hangtime layup that looked prettier on replay.

Duke seemed lost on defense. The lack of a single go-to guy on offense made matters worse.

Michigan State fired back on everything Duke gave them on the offensive end. The scores were close the entire 40 minutes.

Duke had a lot of chances to either tie or take the lead but missed on all of them.

Barrett was fouled by Xavier Tillman in the dying seconds. He missed the first free throw but accidentally made the one meant to be missed.

Duke never got another chance as Winston dribbled out the clock as Michigan State celebrated the hard fought victory.

The Spartans are now headed to its eighth Final Four under coach Tom Izzo. They will face No. 3 ranked Texas Tech in the Final Four.

Williamson and Barrett will likely become the number one and two picks in this year's NBA draft. Reddish and Jones are likely to go top 10 as well.

The upset may be a blessing in disguise for the four Duke freshmen as they can now focus on preparing for the NBA draft.

That is if all four of them decide to go pro this year.

With Michigan State's NCAA title hopes still alive, what's next for Duke's future though? Leave a comment and let us know your thoughts.