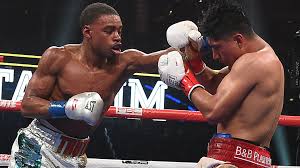 Errol Spence Jr. continues to cement his legacy as one of boxing's big names. The 29-year old remains undefeated after a dominant performance against Mikey Garcia.
Spence put on a brilliant performance Saturday in taking apart Mikey Garcia, his most accomplished opponent to date.
The IBW welterweight champion stays undefeated as he improves to 25-0 after two judges scored it 120-108, and the other one had it 120-107 all in his favor.

Spence's performance has been compared to the likes of Floyd Mayweather, Sugar Ray Leonard, and Roberto Duran.
The 47,525  in attendance at AT&T Stadium withessed what seemed to be a throwback. Spence showed elusiveness as he was able to transition from defense to offense efficiently.
He has been compared to some of boxing’s legendary champions since he started professionally.

The then 39-0 Garcia was looking for a new challenge. He had to move up two divisions just to get it.
Instead of becoming a five-division world champion, what he got was punishment from Spence, who kept firing from everywhere round after round.
Garcia was getting outlanded by five punches to one. His cornermen were even concerned that they almost intervened to stop the fight at some points.
“All kudos to Errol Spence,” Garcia said. “He’s the truth. He’s for real. He’s a great champion.” he added.
Spence had a significatnt advantage since the tale of the tape. Garcia had a four-inch disadvantage in height and reach.
The only good takeaway of this fight is the fact that Garcia has provided Spence with legitimate competition, one that the champion has been criticized for lacking in the past.

Manny Pacquiao and Mayweather were both ringside watching Spence was put on a clinic. Both legends of the sport had to be impressed with what they saw.
Pacquiao was the one to climb to the ring after the bout. It seems like we got a tease of what is to come in the future.
Spence is ranked No. 2 No. 2 pound-for-pound according to Yahoo Sports. He may have solidified his case after this fight.
It is now safe to consider Spence to be on an elite level. Having Pacquiao will furthut boost his star status regardless.
Pacquiao was interviewed in the ring after the fight. He said that he wants “Real fights against real fighters.”
“I want to stay active and fight again this summer,” Pacquiao said.
Pacquiao vs Spence anyone?

Who do you want to see Errol Spence Jr fight next? Manny Pacquiao? or maybe one more for Floyd Mayweather Jr? Leave a comment and let us know your thoughts.
For more SportNuz, click here for the latest updates.