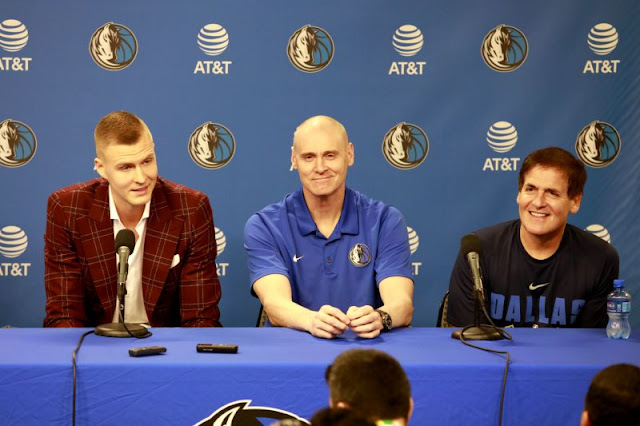 Dallas Mavericks fans scream nostalgia thinking that the Kristaps Porzingis trade is going to create something similar to a Dirk Nowitzki-Steve Nash tandem in the early 2000s.

Porzingis will join rookie phenom Luka Doncic who's on his way to winning Rookie of the Year with his spectacular play.

Sure this has been the Mavericks had their best pair of young stars since Nowitzki and Nash joined forces but team owner Mark Cuban has other plans.

The Mavs are going for a European connection using a 7'3 center who has an outside touch and a 6'8 forward capable of playing all positions.

Doncic will finally be the de facto playmaker of the team while Porzingis creates space. If all works out, a new era of high IQ basketball in Dallas will be a threat for years to come.

Doncic is a complete package with his veteran-like confidence on the court. His play making ability shows how advanced his basketball IQ is when on the court similar to how Nash made decisions when handling the ball.

Porzingis is a very tall shooter that knows how to use his length to generate unstoppable offense. Incidentally, Nowitzki is still part of the Mavericks active roster which is good news if you are training a 23-year old Porzingis.

Nash wanted to stay in Dallas when he became a free agent in 2004. Cuban however didn't want to pay the then 30-year old Nash more than $9 million annually.

The 8-time NBA All Star decided to return to the Phoenix Suns where he won two MVP awards in his eight years there. Cuban admittedly regrets not keeping Nash back then.

Cuban has learned his lesson according to an interview with Mark Stein of the New York Times.

The team owner is putting his money on both Porzingis and Doncic when the time comes that the two become free agents. He even wants both players to stay with the team for the next 20 years.

The Mavericks have freed up a bit of cap space unloading DeAndre Jordan despite a break even on the other pieces involved in the trade.

This gives Cuban time to think about making room for maximum-level contracts on both Doncic and Porzingis. The latter has expressed interest in signing long term when he becomes a free agent in 2020.

As for Doncic's contract, the team holds his option for 2023 and it is very likely they are going to fight any offer sheet thrown his way.


Will the Kristaps Porzingis-Luka Doncic work in Dallas? Will Cuban deliver on his promise to keep both superstars? Leave a comment and let us know what you think.