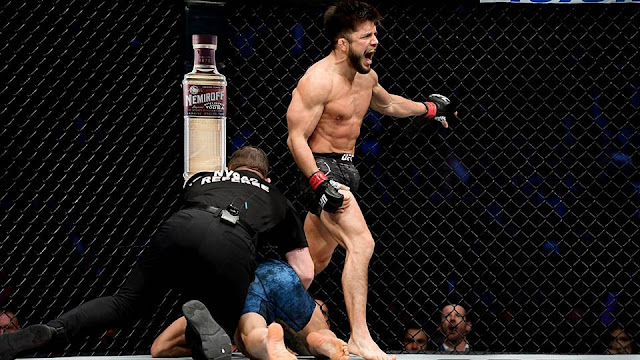 Henry Cejudo has done it again!

First, he scored an upset over Demetrious Johnson in August last year, then he makes quick work of TJ Dillashaw, another man considered to be a pound-for pound-best.

The UFC flyweight champion successfully defended his title against the UFC Bantamweight champion in the main event of UFC Fight Night at the Barclays Center in Brooklyn, New York.

Cejudo finished Dillashaw in just 32 seconds of what was scheduled to be a five round affair.

The two UFC champions quickly look to trade with each other at opening bell.

Cejudo connected first though with a right and that dropped Dillashaw. He quickly followed up with a series of heavy shots before referee Kevin MacDonald stopped the match at the 32-second mark.

Dillashaw protested as he was seen trying to stand up and intelligently defend but the referee's decision was final.

Cejudo now climbs to 14-2, while Dillashaw sufferes his fourth defeat as he falls to 17-4.

No unification for Dillashaw

Dillashaw was feeling confident coming into his match with Cejudo after scoring back to back finishes against rival Cody Garbrandt at Bantamweight.

He was looking to become part of an elite list by winning both the Bantamweight and Flyweight titles but Cejudo had other plans.

Cejudo was looking to prove that his win over Johnson last year was no fluke and intends on keeping the division alive. A win over Dillashaw would be that validation.

Looking to keep the division alive

The 2008 Olympic gold medalist had a plan and that's to make the flyweights still relevant in the UFC amidst rumors of dissolution.

“This victory was much bigger than me,” Cejudo said. Furthermore, he wished that his recent victory is enough to keep the division afloat in the UFC>

He’s not lying, as he took what was expected to be a five-round clash of elite competitors and turned it into a dominant effort that made a case that the flyweight division is as vibrant as ever.

Does Henry Cejudo deserve to be in the pound-for-pound rankings? Was the match prematurely stopped? Let us know what you think.