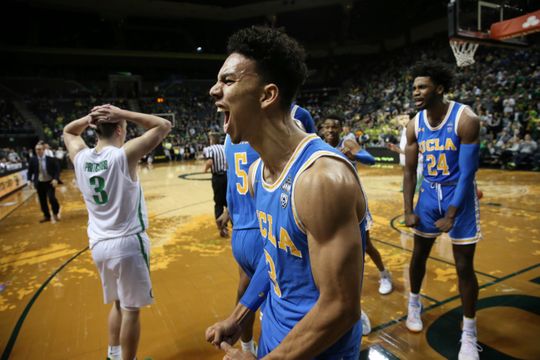 UCLA sparks a last-minute rally that has never been seen before in Pac-12 history.

The Bruins scored a come back win over Oregon, 87-84, in overtime. It was a Pac-12 match-up for the ages where both teams were going in opposite directions.

Oregon was up by nine points with less than a minute left before UCLA rallied to tie the game and force it into overtime.

It was an impressive performance from UCLA who pullled off the largest deficit overcome in the final minute in Pac-12 history.

This also ties them for the sixth-largest come from behind win done in the final minute of a Division I game, with Texas A&M’s 12-point comeback over Northern Iowa in 2016 being first.

They are now 3-0 under Murry Bartow, who assumed interim duties when Steve Alford got fired.

UCLA guard Prince Ali started the team's 21-8 run when he knocked down a 3-pointer with 2:21 left on the clock. The Ducks were still leading by nine points, 65-74, with 51 seconds left.

The Bruins did not give up as Jules Bernard and Jaylen Hands each knocked down a 3-pointer, which cut their deficit to 76-71, with 36 seconds left.

Each team traded free throws before Ali knocks down another 3-pointer, cutting the deficit to one.

Oregon's Payton Pritchard voided a duty foul from UCLA by making both free throws, which brought their lead back to three.

The Ducks almost lost the game in regulation after fouling with 3.3 seconds on the clock. Lucky for them, UCLA's Jaylen Hands made the first and purposely missed the second.

UCLA guard Chris Smith grabbed the rebound and drew a 3-point play with .7 seconds left. He would miss the free throw conversion thus, giving Oregon a chance to salvage the game in overtime.

Momentum was on Oregon's side at the start of OT after scoring the first four points.

Prince Ali became the hero for UCLA as he evened the score with a pair of free throws and a jumper with 1:41 remaining.

Hands would then give his team the lead with a basket at 51 seconds remaining.

Moses Brown would then push the lead up to three after making only free throw.

Oregon freshman Louis King, who scored a career-high 22 points had a chance to send the game into Double OT but missed a game-tying 3 as time expired.


No Alford, no problem

UCLA had a four-game losing streak before Steve Alford was fired as their head coach. The team is now 3-0 after his firing.

Whether Murphy Bartow is doing good on interim duties or the players are breathing the air of fresh start all works in the team's favor.

What do you think about the impressive comeback? Did Steve Alford's firing work in UCLA's favor? Leave a comment and let us know your thoughts.