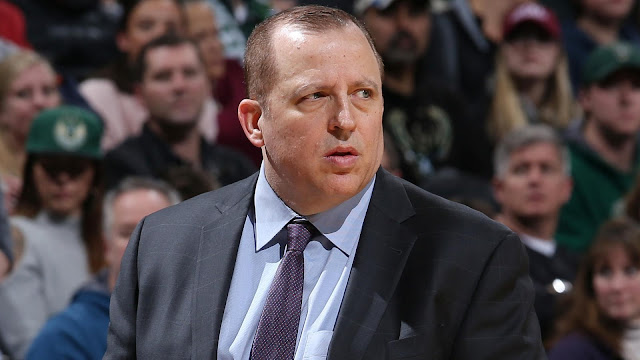 The Minnesota Timberwolves have decided that it's time to move on as they let
head coach and president Tom Thibodeau go after three years with them.

Timberwolves CEO Ethan Casson did not seem impressed with Thibodeau's performance despite coming off a blow out win over the Los Angeles Lakers. He delivered the news to in his office after the game

It was only over a year ago when drama surrounded the franchise as Jimmy Butler felt like the team was not heading in the right direction with it's investment on Karl-Anthony Towns.

This prompted Thibodeau, who was then coach and president of basketball operations to trade Butler to the Philadelphia 76ers for parts.

Thibodeau’s days were numbered back then and his recent sacking was already expected.

The late former head coach Flip Saunders has done good things in Minnesota and they look to see if his son Ryan can do the same as the interim head coach.

The younger Saunders has served as an assistant for the team, while Scott Layden will maintain his post as the team GM.

There are reports that the team has been looking at Fred Hoiberg as either a possible full time replacement or General Manager.

It is uncertain how Ryan Saunders will perform as the team's interim head coach but shall he be able to turn the team around by the end of the season, there may be no need to hire a new coach to take over.

As qualified as Hoiberg and Alford may be as a possible head coach, the Timberwolves also have to see to it that the players do their part.

Former no.1 overall picks Towns and Andrew Wiggins have to look at the game of basketball differently as their alleged nonchalant attitude may be the reason the team is struggling despite both players overflowing with talent.

Their inability to find a winning mentality may also be the reason that Derrick Rose got his back.

What do you think about Thibodeau's firing? Will the Timberwolves be able to turn their fortunes around? Leave a comment and let us know your thoughts.