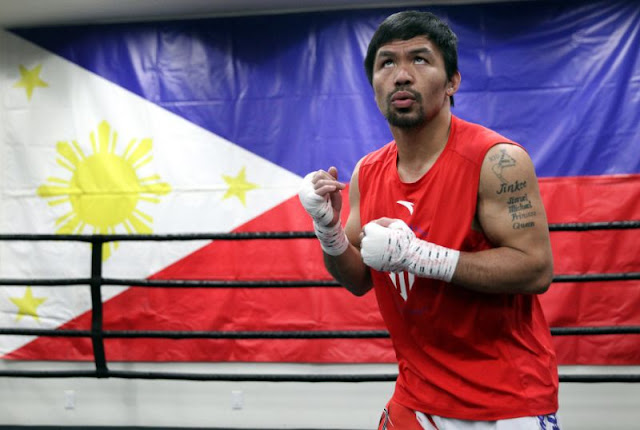 Manny Pacquiao might still be in peak physical shape but his fighting prime is long gone, prime that is measured by his past dominance where he used to knock world champions and future legends out.

The eight-division world champion can retire and live a comfortable life enough to sustain generations of Pacquiaos but the fighting pride of Sarangani has yet to call it quits.

He will be stepping in the ring once again as he faces Adrien Broner, a four division world champion who talks as if he won eight.

Boxing fans already know by now is that the talk is for selling. Broner is confident that he can score one over arguably one the greatest boxer of this generation.

Filipino fans used to be excited everytime a Pacquiao fight is nearing but nowadays, a Pacquiao fight just catches all by surprise due to the lack of draw he now has as a boxer in his native land.

But this does not stop Pacquiao from making no less than $20 million per fight post prime which means he is still very much relevant in the world of boxing.

This quiet relevance is a thankless task for a fighter whoe has to suffer and bleed as he carries the weight of the homeless and unemployed countrymen, who now care less about his career in boxing and more about what he takes home.

There may be no easy money in boxing but at this stage in his career, this might be the easiest way to make billions of Philippine Pesos in one day.

Pacquiao is 40 now, and still moves like he's in his prime if you talk about his speed. He has taken his body well enough to be able to choose when he wants to fight rather than doing it out of need.

His fight against Broner is on Saturday and he is guaranteed another $20 million-ish in fight purse, win or lose.

He still is uncertain of what the future holds even at this point as his political aspirations now coincides with his now high paying hobby which used to be his means to survive.

It took nine years for him to score another knockout. His last was when he knocked out Miguel Cotto in 2009.

Pacquiao used to dismantle those who talked smack about him or his family but he has found some peace in conversion. This is what most attribute to the reason he lost his fire.

But will he win against an identically quick Broner? It would be interesting had he been in his prime but right now, hardcore boxing fans do care about this and may be asking the question...

What took so long?

Is this Manny Pacquiao's last hoorah? WIll AB score an upset over Pacman? Tell us who you pick to win this fight.