Dennis Smith Jr: Out of Dallas? 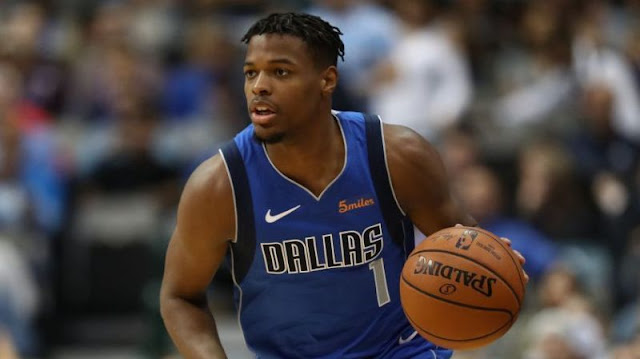 It shouldn't have gone down to this had Dennis Smith Jr. given the Dallas Mavericks a wining season.

Obviously they lost, which gave them the chance to trade up in the draft to get a better fit in Luka Doncic.

Smith's play just does not fit well with Doncic's. Apparently, the latter happens to be more efficient both as a wingman and a ball handler.

Dallas still made the right choice of drafting Smith as he still has loads of potential. His ball handling is still decent and has enough explosiveness to create.

It's just that Doncic has provided better results this season.

As good of a point guard as Smith is, he seems to be lost in the starting unit's ball rotation with Wes Matthews and Harrison Barnes playing spot-up duties while Doncic playing a good 1-2 combination with DeAndre Jordan.

What's worse is that the Mavericks' offense gets better by by 16 points per 100 possessions when Smith gets subbed.

Smith's potential and still decent game provides the Mavericks with a trade gambit for their 21-year old guard.

If Smith wishes to improve as a player and potentially become the no.1 go-to guy, he himself must wish to be traded.

It might end up being like the Evan Fournier-Mario Hezonja case where the promising career of Hezonja was destroyed by Fournier's dominance with the ball.

Doncic wouldn't do that to Smith on purpose but it's the former's impressive performances that might make it look like it.

The Mavericks are said to be engaging in trade talks to move Smith out. The Phoenix Suns and the Orlando Magic are said to be the interested according to reports.


Who needs it more?

Both the Magic and the Suns asre in desperate need for a good point guard that would create for them but still manage to contribute on offense.

It is obvious that giving the ball to Fournier is not a solution for the Magic. In fact, his dominance with the ball has prevented all decent contributors from possibly helping out.

It might also be the reason why we have to say goodbye to the hopes that Mo Bamba will be as hybrid as a Giannis Antetokounmpo.

As for the Suns, they need a real point guard and not one that has to play double duty. This will allow Devin Booker to worry about just scoring while somebody else worries about facilitating.

Smith isn't your traditional pass-first point guard but he has shown that he is capable of decently paying the point.

With Dallas' intent on trading the sophomore, Smith might be moving out before the Feb. 7 deadline. Let's just hope he lands on the right team.

Is Dennis Smith Jr. going to be a star elsewhere? Where do you see him going? Leave a comment and let us know your thoughts.