What We Learned from Fiorentina vs Juventus Match 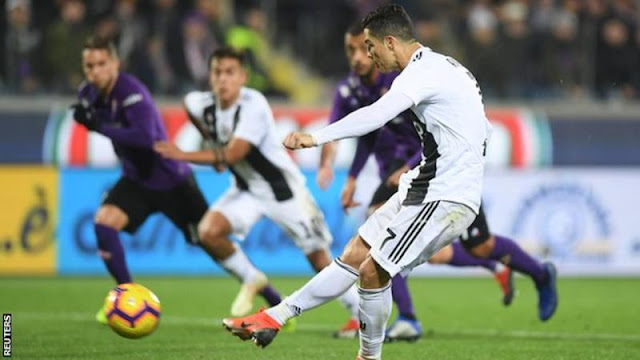 Juventus saw off Fiorentina on matchday 14 of Seria A courtesy of goals from Rodrigo Bentacur, Giorgio Chiellini and Cristiano Ronaldo respectively.

The Old Lady took the lead on the 31st minute of the game after Rodrigo Bentacur connected well with Dybala's pass.

The second goal came in the second half through as Chiellini slotted one home from close range.

Ronaldo capped it up as he nonchalantly converted from the same spot eight minutes later to give Juventus a comfortable 3-0 lead.

Fiorentina failed to pull in close till the final whistle.

Here are the five main talking points of the match:

Bianconerri extended their lead at the top of Serie A table. They have managed to collect 40 points in 14 games to set a new record in Scudetto history.

The victory puts Juventus in prime position to win the Serie A title. They are poised to win it again for the eighth consecutive time.

Cristiano Ronaldo has indeed brought his proficiency to Italy's top league as he continues to impress wherever he goes.

The Portugese superstar made the best start of his Serie A career as he becomes the first Juventus player to reach double figure goals in his first 14 games.

The 61-year old record was held by Welsh footballer John Charles after scoring his 10th Serie A goal for Juventus in 1957.

Juvetus remains the only team in Europe's top leagues to remain undefeated on the road. They managed to keep their away intact so far in 2018.

The Turin based side have now picked up an average of 2.7 points per game in away games.

They layed flowers in front of the Fiorentina bench before the game began in honour of Astori, who was found dead on the fourth of March this year in his hotel room after passing away in his sleep.

Ronaldo being Ronaldo as usual

Ronaldo continues to prove that he is the best player in the world.

The goal-scoring machine has made his presence felt everywhere he goes. He brought to Italy his goal-scoring prowes which earned him legendary status in Spain.

The 33-year old Ronaldo is showing no signs of slowing down with his incredible scoring abilities. His off-ball movements and positioning played a major role in Saturday's clash, as  he scored his 11th goal of the season for Juventus across all tournaments.

Is the Serie A title a sure win for Juventus? Will other teams be able to catch up? Leave a comment and let us know your thoughts.