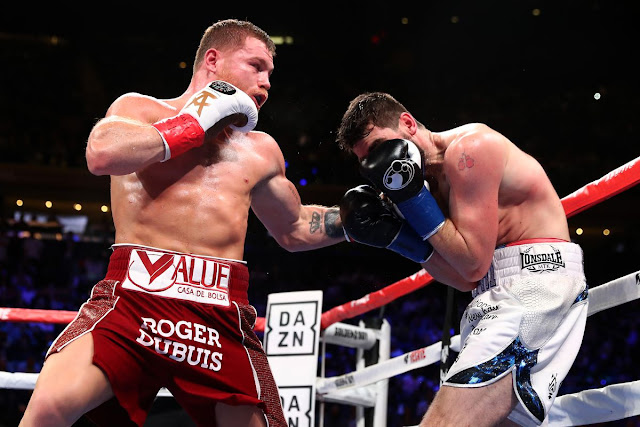 Saul "Canelo" Alvarez made a huge statement going up to the super middleweight division.

After a hard fought bout with Gennady Golovkin almost three months ago, Canelo made sure this one will be quick as he disposed of Rocky Fielding in the third round.

He now has the WBA super middleweight championship added to his collection.

Putting on a clinic

It was a one-sided affair as Canelo put on a clinic with some textbook punches. He made sure he invested on the body with some solid blows.

Alvarez sent his taller opponent on his knees three times with those body shots. Fielding looked like he needed to catch a deep breath as he tried to recover from each knockdown.

Referee Ricky Gonzalez decided that Fielding had enough after the fourth knockdown and stopped the fight at 2:38 in the third round.

The fight against Fielding was Canelo's first fight under his $365 million contract with DAZN. Fans were given a sneak preview of what to expect from the live streaming service.

Some who bought a subscription were quick to criticize the caliber of Alvarez's opponent however, the now unified middleweight champion has 10 fights left under his current deal.

A fight with Daniel Jacobs is highly considered as Alvarez goes back to middleweight but it's a third match with Golovkin that would possibly generate a lot of subscriptions for DAZN.

Canelo looked very confident as he paced himself and boxed smarty in his fight with Fielding so it's safe to say that he is saving more for the upcoming fights.

Who do you want to see Canelo face next? Will it be Golovkin or Jacobs? Leave a comment and let us know your thoughts.