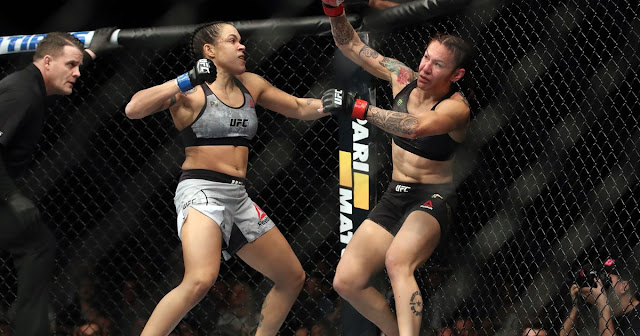 Amanda Nunes has cemented her status as an all-time great in the sport of Mixed Martial Arts.

The UFC Women's bantamweight champion secured another title belt when after knocking out Cris "Cuborg" Justino in the co-main event of UFC 232.

Nunes was facing one of the most dangerous strikers in Women's MMA, Cris Cyborg.

Both fighters came out swinging and looking for the quick finish as they went forward at one another with no regard to each other's power.

It was actually Cyborg who was putting on more pressure but Nunes landed a left, then following up with a looping right that both landed on the chin.

Cyborg staggered, which made her absorb more shots from Nunes. Another knockdown later and referee Marc Goddard decided Cyborg had enough.

The empowerment of women in the sport of MMA is fairly young but there are some names that paved the way for the sport.

Ronda Rousey was the consensus greatest women's MMA fighter of all time but after being dominated by Nunes exactly two years ago, it was obvious that she was poised to succeed.

Forget her early losses, forget her personal views. Amanda Nunes continues to pave the path of empowerment in Women's MMA.

Nunes exhibited a lot of confidence as she was heard telling UFC president Dana White, “Dana, now can I go into the Hall of Fame?”

After her impressive performance agains Cyborg, it only makes sense that she will have her place up there someday regardless of what happens in the future.

Is Amanda Nunes the GOAT? Who do you want to see her fight next? Leave a comment and let us know your thoughts.