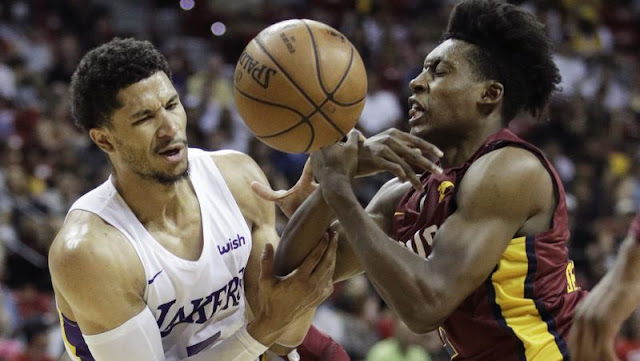 Ten games into the season, it seems like Cleveland Cavaliers rookie Colin Sexton has to learned after all.

Sexton's veteran teammates are seemingly not sold on the No.8 overall pick, as The Athletic reports that the line on Sexton throughout the organization is that "he can't play."

Cavs veterans have been vocal about young players not knowing their role and it seems like their rookie point guard is the focus of their frustration.

Cavs' starting point guard George Hill offered his time to teach the 19-year old rookie how to play defense however, the rest of the team thinks Sexton will not listen.

There is no personal heat with the rookie with regards to matters outside of basketball though as Sexton's veteran teammates still see him as a nice kid in the locker room.

Frustrations may come from the Cavaliers' 1-9 start to their regular season. The departure of their franchise player, an injury to their succeeding star, and the dissatisfaction by the supporting cast do not help matters for the Cavs.

Sexton is only 19 and has only played one year of college basketball. He is also buried in an offense-heavy rotation of point guards.

Despite being the third option at the point however, Sexton still manages to average 10.5 points, 2.3 rebounds, and 2.2 assists per game in his break-in season with the Cavs.

The scary part though is that Sexton seems to have a nonchalant attitude towards their losses and that is what worries his veteran teammates.

Oklahoma City Thunder star Paul George was almost in a similar predicament as Sexton when he was drafted 10th overall by the Indiana Pacers in 2010. George barely turned 20 and it was Danny Granger, who was playing the same position as George who carried the team to winning seasons.

George was contributing regularly but it took a lengthy injury to Granger for it to sink into George that he was the one who needs to step up.

Sexton must adapt the same mentality and here is where the veterans have to step in. Hill offered his personal time  but if it isn't a significant amount of playing time offered, it is less likely that Sexton will feel the need to step up.

Sexton's career in some ways are parallel to Sacramento Kings point guard De'Aaron Fox, who was drafted 5th overall last year. Fox had a lot of playing time and touches due to his veteran teammates allowing him to go rampant on both ends of the floor.

Fox is doing well this season and Sexton may do the same next season shall his teammates give way.

For all its worth, Fox and Sexton look very much alike.

Do you think Sexton can live up to his potential? Are his veteran teammates partly to blame for hogging the spotlight? Give us your thoughts on the Cavs rookie.