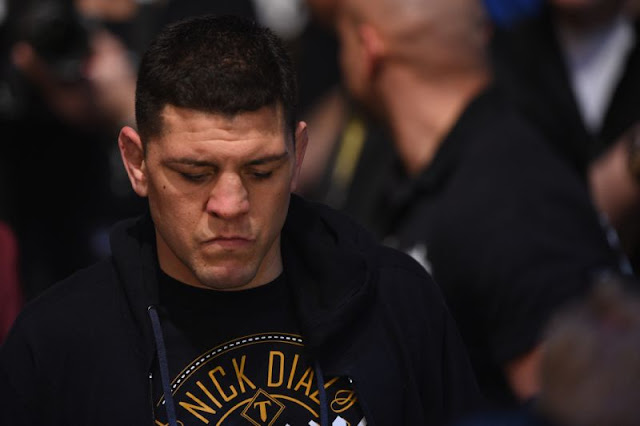 UFC Fighter Nick Diaz will return to the Octagon in March 2019 as he faces Jorge Masvidal in a Welterweight bout.

The Stockton Native returns after a four-year hiatus from the sport. His last MMA fight was in a loss to Anderson Silva at UFC 185 in 2015.

Diaz has not won a UFC fight in almost eight years. His last win was a unanimous decision victory against BJ Penn in 2011.

The former Strikeforce welterweight champion has suffered defeat at the hands of Carlos Condit, Georges St. Pierre, and Silva respectively.

Though Diaz's work ethic is never questionable, it's his motivation that is. He seems to be content with alternating between triathlons and Brazilian Jiu Jitsu competitions, and only fights for a little extra cash.

Then, it's Diaz's reliance on marijuana that has got him in a lot of trouble in the past. Some of his wins had to be overturned after testing positive for usage.

In his scheduled fight against Masvidal, the 35-year old is most likely going back to his old ways and antics inside the octagon.

Diaz is a scrappy striker as he is as a grappler. His durability and cardio has helped him keep a sustained pace for extended periods.

In Masvidal, Diaz is expected to be slugging it out with the former Vale Tudo fighter, probably maybe invite his opponent to test his ground skills.

Diaz's chin will also be put to the test once again as the heavy handed Masvidal always looks for finishes. It will be a question of who becomes the aggressor though.

While this fight will not mean title implications just yet, this might be a right step towards it shall Diaz manage to win and stay clean.

Are you excited for the return of Nick Diaz? Can he manage to stay clean heading into the fight? Let us know your thoughts.