Jimmy Butler Sinks Another Game Winner for the 76ers 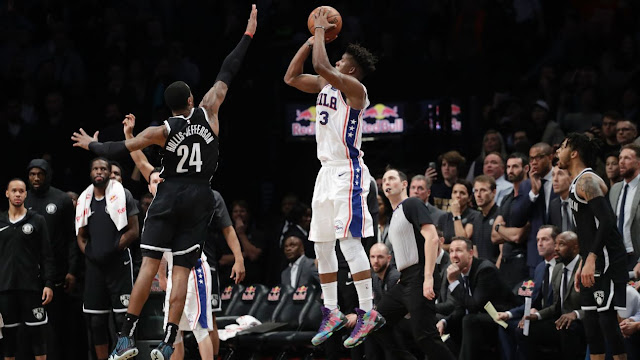 it seems like Jimmy Butler has taken his winning attitude to the Philadelphia 76ers with receipt.

While last Saturday's game is still fresh in our memories, Butler did it again with 0.4 seconds remaining against the Brooklyn Nets.

The Sixers were down 125-124 in the final 10 seconds when their All Star wingman hit a step back 3-pointer over the outstretched arms of Rondae Hollis-Jefferson.

The Nets failed to make something out of the next play 0.4 seconds left in the clock.


He did it again!

Butler has already hit two game winners for his new team since being traded from the Minnesota Timberwolves. Both shots were made in a span of eight days.

The four-time NBA All Star's talents are undeniable but has had problems with teammates in the past. His winning attitude brushed former teammates the wrong way, as he is focused on the game of basketball.

He finds himself in the right place at the moment alongside Joel Embiid, who is averaging career highs across three categories, and  2018 Rookie of the Year Ben Simmons.

The 29-year old Butler is just what the Sixers need right now to lead a young team deep into the Playoffs.

Butler in Philadelphia for good?

Jimmy Butler will be a free agent in 2020 and teams will be wanting to offer him a max deal.

Embiid has already covered a large chunk of their cap room, while Simmons will be attracting huge offer sheets as a Restricted Free Agent in 2020. That is if Simmons will turn down a qualifying offer from the team.

Butler's tenure with the 76ers will also depend on how far the team will go as far as the playoffs is concerned.

If things do not go the way Butler wants, this might be Minnesota all over again.

Will Jimmy Butler stay in Philadelphia for good? How far can he take his new team this season? Leave a comment and let us know your thoughts.