Derrick Rose Injures Ankle in Game Against the Warriors 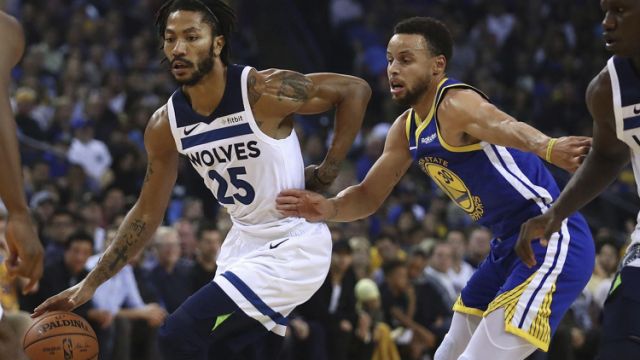 Misfortune has once again struck Minnesota Timberwolves guard Derrick Rose a game after his 50-point effort. The Timberwolves were visiting the Warriors in Oakland.

Rose left the game in just five minutes of play after feeling soreness on his left ankle. He only had three points and two assists in that timespan

The visiting Timberwolves went on to lose the game 116-99.

Rose's career started going on a downward track after becoming the winning the Most Valuable Player (MVP) award in 2011. He became youngest player in NBA history to win league MVP at the age of 22.

The number one seeded Chicago Bulls, Rose's team back then, would then be eliminated by the number eight seed Philadelphia 76ers in 2012, after Rose tore his ACL. The injury cost Rose the entire 2012-2013 NBA season.

Upon his return in the 2013-2014 NBA season, Rose would then injure the meniscus in his right knee, 10 games into the season. This cost the former MVP and All Star another few years of his prime.

Rose bounced around teams before seeming to. find a home in the Timberwolves last season. He finished the season averaging 17.9 points.

This year seemed to be Rose's official comeback after a 50-point performance in a winning effort against the Utah Jazz last Wednesday when misfortune struck the following game.

What Rose's injury means for Minnesota

With all the Jimmy Butler drama in Minnesota, the Timberwolves are left without a true veteran leader with a winning mentality. After Rose's performance against the Jazz, he proved that he still has those attributes until the worst happened.

Although there isn't any new update yet regarding his injury, Timberwolves fans are hoping that it is nothing serious and their uncrowned star will return to the lineup as soon as possible.

Minnesota is not guaranteed a second straight playoff berth yet judging by the performances of other teams and Rose's potential absence lessens their chances even more.

All that can be done right now is to hope for Rose's speedy recovery.

Will Rose's injury hurt Minnesota's playoff chances? What does his injury mean for the team? Leave a comment and we would like to hear your thoughts.