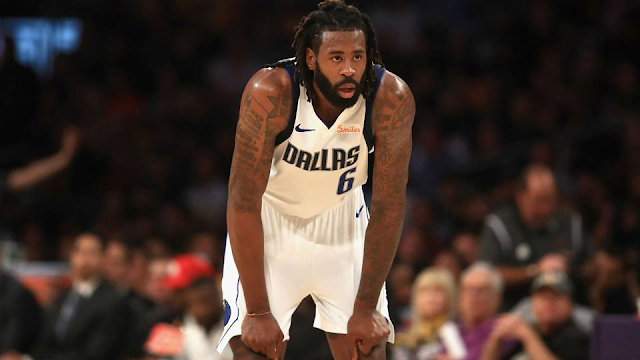 DeAndre Jordan doesn't seem to be making friends in his new team. The Dallas Mavericks center has been tagged as 'selfish' by some for his alleged poaching.

It was in the third quarter of the Mavericks' against the New York Knicks when Jordan pushed away rookie teammate Luka Doncic to grab the defensive board.

Doncic did not look pleased based on his body language.

In an interview with the Dallas Morning News, Jordan didn't seem apologetic for his action. He even admitted that he has been poaching for the past 11 years.

Jordan went as far as saying that he feels like every rebound that comes off is his. He has been reportedly hesitant as well helping on the transition defense.

Teammate Dwight Powell has reportedly called "friendly fire" whenever he shares time on the frontcourt with Jordan. Is DeAndre indeed a poacher?

Mavs' point guard Dennis Smith Jr. came to the defense of the All-NBA Center. Smith would tag the reports as "fake news"  in an Instagram post, and how the team only has the eye on the prize.

Jordan signed a one-year, $22 million contract with the Mavericks in the summer. This gives the team time to evaluate if he is indeed a good fit for the team moving forward.

Right now, the Mavericks are 5-8, and are third to the last in the Western Conference. It is a rebuilding year for the Mavs, who are still trying to brew a winning formula around their young core of Doncic and Smith.

What ever happens in Dallas this season, at least the Mavericks are only leasing Jordan's services short term.

Is DeAndre Jordan a selfish teammate? Is he a perfect fit for the rebuilding Mavs? We want to hear your opinions.