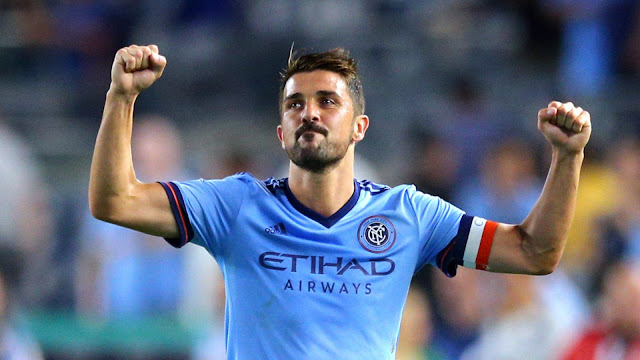 New York City FC announced Wednesday that David Villa will not return to the club next season. The Spanish striker has chose to continue his career someplace else.

One of the few big names in MLS, Villa has made 124 appearances for NYCFC, scoring 80 goals in his four-year stint with the club.

The World Cup winner transferred to the Bronx-based club from Atletico Madrid in 2014. The team was fairly new back then as Villa would be their first player.

Villa was quoted saying that the purpose of him joining the club is that it was an "irresistable project."

He would then go on to be one of the most decorated players for the club, playing in four MLS All Star games, as well as winning the league's MVP award in 2016.

Villa's contract ends on December 31, making him a free agent.


Where does Villa go?

It seems like retirement is not in the mind of the 36-year old just yet. It seems like Villa is headed for the J1 League Japan as he is heavily linked with Yokohama F Marinos manager Ange Postecoglou.

Villa played for Melbourne City on loan during the 2014-2015 A-League season. Postecoglou on the other hand managed a number of A-League teams in the past, majority of them based in Melbourne.

Speculations have been strengthened by the fact that former Spanish national teammates Fernando Torres and Andres Iniesta are currently playing in Japan as well.

The world of football awaits Villa's decision in the upcoming days.

It is common for International superstars to bounce around smaller leagues at the tail ends of their prime. The United States usually becomes a popular stop, particularly Major League Soccer.

Villa will be turning 37 in December and has his legacy already cemented with a number of accolades in his junior and senior careers. He has been on top for such a long time that right now, it's a matter of just wanting to play the game.

Football David Beckham had a similar track before retiring from the sport in 2013. Even Wayne Rooney is trekking a similar path.

Last stop or not, it no longer matters where Villa plays next. He will always go down as one of the best footballers to play the game.

Where will David Villa play next? Will this be his last stop? Leave a comment and let us know what you think about the Spanish striker.