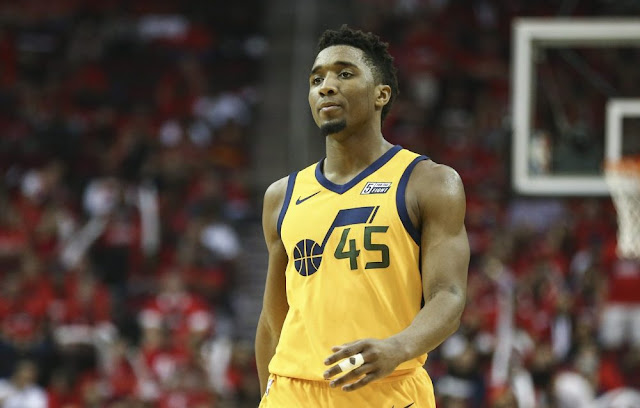 Utah Jazz guard Donovan Mitchell is focused as he sets his sights on giving his team its first NBA title.

Mitchell looks to up the ante after a stellar rookie season, which saw him lead the Jazz to the fifth seed in the Western Conference. This was despite the departure of key players such as Gordon Hayward and George Hill.

Now in his sophomore year, Mitchell told Yahoo Sports that "the goal is a championship." Furthermore, he said "We're all in this for a championship. We're not here for nothing else."


A tough task ahead

Mitchell has proven himself as capable the moment he carried the Jazz to a first round win over the Oklahoma City Thunder in the 2018 NBA Playoffs. He did not only just beat a Thunder lineup, but one that features Russell Westbrook, Paul George, and Carmelo Anthony.

The Jazz struggled however when they faced the Houston Rockets in the second round. Things wouldn't be easier now that Anthony has found a new home alongside James Harden and Chris Paul with the Rockets.

There also is the Golden State Warriors which manages to win due to the predictable nature of their game.

What sparks the most intrigue however is the Los Angeles Lakers, who now have LeBron James as their leader. The Lakers have assembled a somewhat dysfunctional but extremely talented lineup with James at the center of everything.

The Western Conference is going to be tough for the Jazz heading into the postseason but Mitchell is ready to take on anything.

"At the end of the day, what can you do, cry about it? You've got to get out there and play," Mitchell said.

Nobody expected the Jazz to even make the playoffs last season. Especially not in a Western Conference where winning records do not guarantee a playoff berth.

The Jazz look to do the same going into the 2018-2019 NBA season as they hope to break more hearts and crushing others' playoff hopes. "I think we're going to keep that same mindset, keep that same underdog mentality and play ball," Mitchell said.

Mitchell's solid rookie performance makes him a marked man and is aware that the burden is on him to get his teammates involved. He is focused on not only replicating his scoring output last season but also getting his assist numbers up by getting teammates more involved.

Can Donovan Mitchell bring a title to Utah?

Mitchell will definitely not be alone in his quest to bring the Utah Jazz its first NBA title.

He will have reigning Defensive Player of the Year Rudy Gobert up at center, while forward Joe Ingles looks to continue being a reliable asset in the Jazz's rotation.

Point guard Ricky Rubio looks to repeat what was a solid first season with the Jazz, while Derrick Favors helps on the interior.

The Jazz also have an x-factor in rookie Grayson Allen, who is Hayward-like on offense while not shying away from being rugged on defense if needed.

Mitchell has a fairly young core to back him up and it is up to Head Coach Quin Snyder to maneuver the pieces.

So to answer the question if Mitchell can bring a title to Utah? Yes he can, especially if he continues to improve at the rate he is going.

Do you think Donovan Mitchell can bring a title to the Utah Jazz this season? Will his numbers improve in year two? Leave a comment and let us know your thoughts.