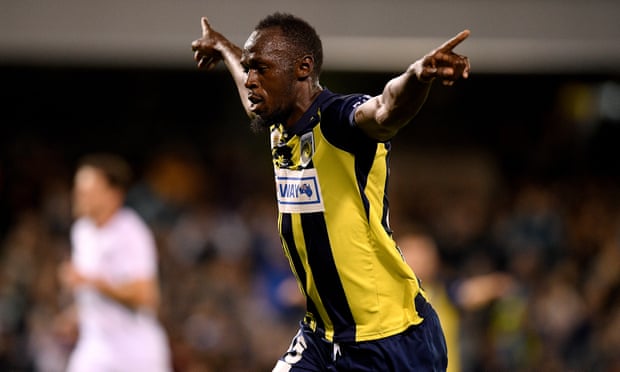 Olympic gold medalist and eight time sprint champion Usain Bolt has finally scored his first goal as a professional footballer. The Jamaican not only did it once but twice in the same game.

Bolt was plays for the Central Coast Mariners in Australia's Hyundai A-League, where he made his debut last August 31. He mad his first start with the team on October 12, in a game against Macarthur South West United.

The Mariners were facing Macarthur when Bolt, who was making his first start, did not disappoint as he put on an impressive performance. After a 2-0 start for the Mariners ash the end of the firsthalf, Bolt sped up like he is known for in the second half.

Bolt looked like the fastest man in the world we all know when he ran onto a chipped ball, which he successfully converted after Macarthur's goalkeeper failed to make a low save.

Bolt picked up speed again, capitalizing on a collision between a Macarthur defender and their goalkeeper as he kicked the ball in from close range.

Ross McCormack and Jordan Murray scored the two other goals in the Mariners' 4-0 win.

Known as being cocky in the track oval, Bolt remained humble in the light of his new feat in his quest to become a pro football player. He still did his signature Bolt pose though.

"I'm happy that I could come here and show the world I'm improving. I'm keen to be a Mariner, to play my best and get into the team," Bolt said.

McCormack pointed out Bolt's humility saying "the best thing about Usain Bolt is he's so humble."

Furthermore, McCormack said that "he's fitted in well with the lads. From my first day even to where he is now, the transformation is huge."

Bolt's achievements in the world of athletics is unparalleled. He still remains the fastest man in the world up until somebody as gifted as him emerges.

He retired from athletics in 2017 after suffering a hamstring injury. He then set his sights on fulfilling a lifelong dream to play professional football.

The former Olympian tried out for multiple teams such as Borussia Dortmund, Mamelodi Sundowns in South Africa, and Stromsgodset Toppfotball in Norway, all in the hopes of being offered a contract.

Bolt got another chance to show what he has to offer when he started training for the Central Coast Mariners in late August. His steady improvement bumped him from a substitute, all the way to a starter in their last game.

The Australian A-League season starts on October 19, which gives the Mariners barely a week to decide whether or not to offer Bolt a full time contract.

Will Usan Bolt be offered a contract by the Central Coast Mariners before A-League season starts? What does his recent performance mean for the 32-year old? Leave a comment and let us know your thoughts.