US Cruises Past Mexico to Qualify for World Cup 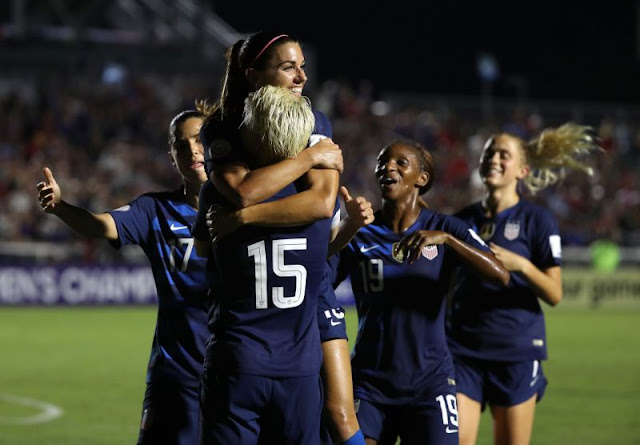 The U.S. Women's Soccer Team cruised past Mexico on opening night of the CONCACAF Championship at the Sahlem's Stadium in Cary, North Carolina.

Team USA secured its spot on next year's World Cup tournament in France with the win.

Megan Rapinoe and Alex Morgan scored two goals apiece as they led their team to a 6-0 victory. Julie Ertz and Tobin Heath scored one each as well.

The United Soccer Soccer Women's National team were spot on with a strategic formation that emphasized on balance in the midfield.

Horan and defender Crystal Dunn were moving forward on the left side as they do a little bit of double duty when possessions change.

Aside from switching from attack to defense mode in the midfield, the forward position was potently contributing as evidenced by Rapino and Morgan's scoring outburst.

Ertz who played as a defensive midfielder also had touches on offense as she too was switching duties on possessions.

United States women's national team looks like they are all set and will not need more pieces in their quest to repeat as CONCACAF champions. They are already threatening as it is in their match agains Mexico.

They now look to continue what they started in their next game against Panama on Sunday.

Can the USWNT win it all? Will they be able to carry their country all the way to the World Cup? Let us know your thoughts.