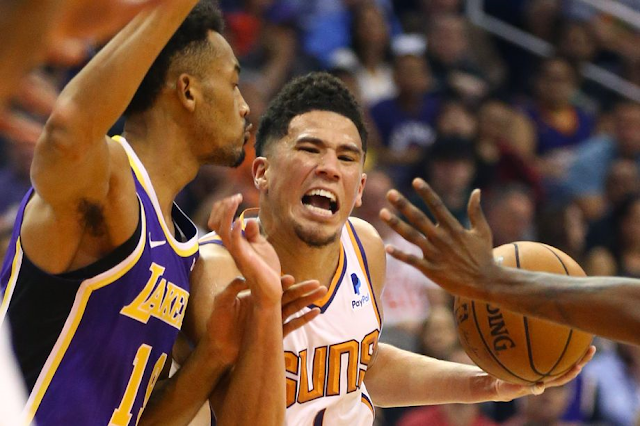 Scary news for the Phoenix Suns as guard Devin Booker strained his left hamstring in their game against the Los Angeles Lakers.

The Suns leading scorer's exit late in the third quarter proved to cost the Suns as they suffered a 131-113 loss to the Lakers. Booker would not return to the game.

Booker scored 23 points, and added seven rebounds and seven assists before the injury.

Rookie Deandre Ayton tried to keep the Suns alive, scoring 22 points and adding 11 rebounds but the Lakers were too much to deal with as seven of them scored in double figures.

Both the teams have an identical 1-3 win-loss record, with the Suns losing their third straight.

Booker was already starting to heat up when he went down after an unsuccessful drive attempt over Lakers center Javale McGee.

The Suns' rookie center Ayton showed that he is capable of carrying the load but his teammates were not able to provide efficient offense to keep the Suns alive in the game.

Both Booker's teammates and the entire home crowd were quiet as Booker exited the court.

All optimism for the Suns

Team medical staff will run some tests and examine the degree of Booker's injury. Results of the evaluation will be made Thursday.

Booker seems positive that his injury is nothing serious. "Standing still, I'm good, It's not that bad," he said.

It is unclear if Booker will be able to cleared to play in the Suns' next game on Saturday against the Memphis Grizzlies. He might be advised to rest it out regardless of how minor the injury might be.

Can Booker make a successful recovery? How will the Suns fare without their leading scorer? Leave a comment and let us know what you think.