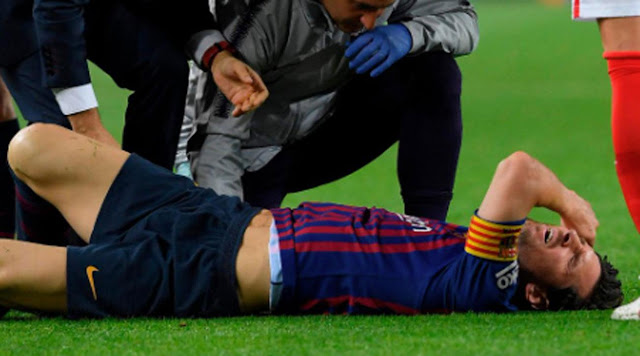 A scary moment for FC Barcelona as Lionel Messi may have suffered a serious injury in their game against Sevilla on Saturday.

It was only the first half when Messi challenged Sevilla midfielder Franco Vasquez for the ball, causing him to land awkwardly on his right arm.

Messi was writhing in pain as he was attended to by the team's medical staff.

The Argentine star was replaced by French forward Ousmane Dembele in the 25th minute, as he headed straight for the dugout, before being taken to a nearby medical facility.

Losing their top scorer may have not affected the outcome of this game but may cost them in their other fixtures, especially in Champions League games.

Barcelona is still a formidable team however without Messi, but will take a huge dip in scoring, which will be needed against high scoring teams.

How Messi's injury will affect Barcelona

Right now FC Barcelona sits atop the La Liga standings after the win, while Real Madrid and Atletico Madrid lost their respective games.

Messi's injury however will be a problem for Barcelona next weekas they play their Champions League games against Inter Milan, and Real Madrid in La Liga.

If Messi's injury is as serious as it looks, Barcelona might just drop one to Real Madrid in their Classico. That is despite them hosting their rivals at Camp Nou.

How will Lionel Messi's injury affect FC Barcelona? Will the team lose a lot of games without the Argentine Star? Let us know what you think about it.