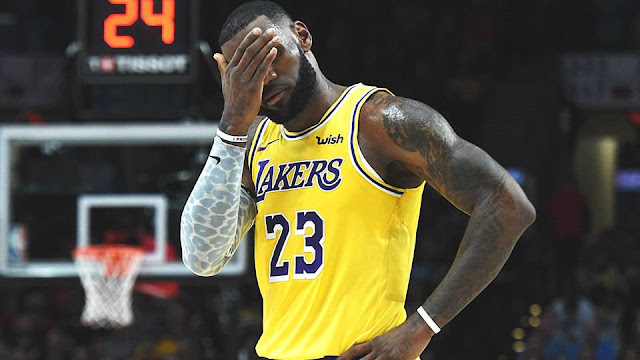 LeBron James is now 0-4 when playing his first game after transferring to a new team.

His debut with the Los Angeles Lakers on Thursday night against the Portland Trail Blazers may not go as expected, but showed flashes of what is to come as the season goes.

James scored 26 points, grabbed 12 rebounds and added six assists, in a game where the Lakers wasted a lot of 3-point opportunities.

The Trail Blazers now hold a 16-game winning streak against the Lakers.


Just a the first game

Basketball fans have already concluded that the Lakers are destined to fail just by watching the first game but James thinks otherwise.

Furthermore, James talked about the high number of missed 3-pointers saying "They were all great shots. They just didn't go in."

While the Lakers were throwing bricks, Trail Blazers guard Nik Stauskas played as if it was the game of his life as he scored 24 points coming off the bench, including five three pointers.

The Trail Blazers all star back court of Damian Lillard and CJ McCollum were also having a good night on offense.

The Lakers only converted on 7-of-30 three-point attempts. They missed their first 15 attempts before Josh hard drained one towards the end of the third quarter.

It was only is the first game of the season and bricks aside, the Lakers actually did well as a team.

Scorers Brandon Ingram and Kyle Kuzma were getting their usual touches, Javale McGee was dunking around the place and grabbing boards and Rajon Rondo tallied double digits in assists as usual.

Will the Lakers fail?

The Lakers may have lost this one but with the players' usual stats not taking a dip despite James being an all around go-to-guy, this will be a scary team when offense heats up.

Besides, the Trail Blazers are one of the top teams in the West and the Lakers only lost to them by nine points despite an extremely cold shooting night.

Fans may be quick to make comparisons to the Cleveland Cavaliers lineup James spearheaded at the start of last season but we also have to remember that these are not the exact same players playing for the Lakers.

A tougher test will be the Lakers' next game as they host the Houston Rockets on Saturday.

Can LeBron James lead the Los Angeles Lakers to the playoffs? Are they destined to fail like fans say? Let us know what you think about James and the Lakers.