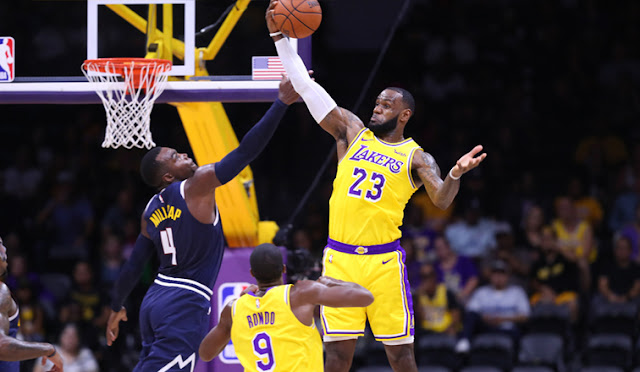 LeBron James makes his debut for the Los Angeles Lakes in a preseason opener against the Denver Nuggets. Denver beat the Lakers 124-107.

Although the numbers weren't his usual, James gave a preview of what to expect from the Lakers in the regular season.

James didn't have to put up his usual numbers as everybody already knows what he can do. All he needed to do right now is to show what he brings to the Lakers.

He dished out a couple of passes to teammate Brandon Ingram, who successfully converts, as well as facilitating alongside Rajon Rondo in rotating the ball.

If James can put up such numbers in 15 minutes without putting any effort at all, then we are looking at a dangerous Lakers team in the regular season where the games start to matter.

Despite the losing effort, James received high praises from everyone from the coaches, to his teammates, and fans.

What's next for the Lakers?

The Lakers will have a chance to redeem the loss as they face the Nuggets again on Tuesday, October 2. Win or lose, the game has no bearing on what is to come once the regular season starts.

What's next for the Lakers? Expect more cohesion among all players as James continues to see how he can get everyone to contribute to the team.

That, along with James' own contributions makes the Lakers a team to beat, even for the Golden State Warriors.

Expect more ball movement and decent production as the players continue to mesh in actual games.

Are you excited for the Los Angeles Lakers? Will they be the team to beat in the Western Conference? Let us know your thoughts.