DeMar DeRozan Opens Up on His Trade to the Spurs 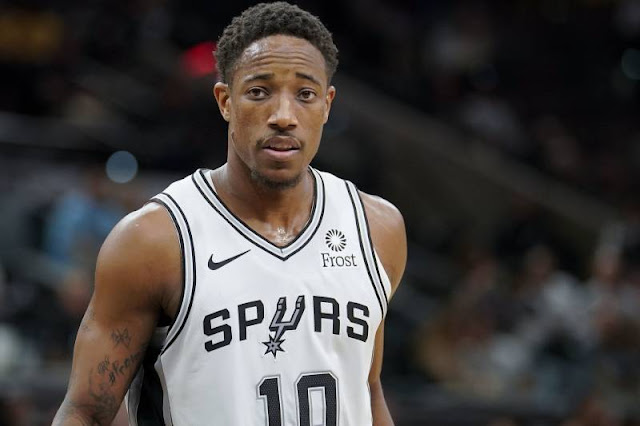 San Antonio Spurs star DeMar DeRozan revealed Wednesday that his trade from the Toronto Raptors to the Spurs hurt him.

The 4-time NBA All Star was interviewed by Michael C, Wright from ESPN.com. He admitted that he struggled to come to grips when he learned about the decision.

DeRozan states that he envisioned himself as one of the few players who stayed with one team their entire NBA career. He made it clear that Toronto is where he wants to be and where he plans to retire.

Already making a case for being the greatest Raptor of all time, DeRozan wanted to debunk the notion that stars do not want to play in Toronto.

The statement couldn't have been more clear than when DeRozan was traded along with center Jakob Poeltl to the Spurs for Kawhi Leonard, Danny Green, and a first round pick. Leonard has openly expressed his lack of interest to stay up north.

The irony is that both players are doing well with their new teams.

DeRozan said that talking to Spurs coach Greg Popovich and general manager R.C. Buford  made him feel better with his new surroundings.

True enough, Popovich has kept his promise as DeRozan is thriving under his new uniform. His averages of 28.3 points, eight assists, and six rebounds per game this early in the season is a career best for him.

The Spurs still have LaMarcus Aldrige and Pau Gasol but the team management has made it clear that DeRozan is where their money is.

Their faith in their new go-to-guy has paid off as DeRozan has led the Spurs to a 4-2 start, including beating LeBron James and the Los Angeles Lakers twice.

Will the Spurs do better than the Raptors?

DeRozan has undeniably been impressive but Leonard has done an excellent job in Toronto as well. The former Spur has led the Raptors to a 7-1 start.

Leonard is averaging 27.3 points, 7.8 rebounds, and 3.2 assists per game as Toronto's de facto leader. The true test for him however is when he goes head-to-head with DeRozan in their first game against each other this season.

The Raptors have a history of losing when it matters. They have always went past the first round of the NBA Playoffs, only to fall to a LeBron-led eastern conference team.

The Spurs however have established themself as a perennial contender who either win it all, or get upset. Now that Leonard is out and DeRozan is in, they look to take advantage of recent changes to hide their cards come playoff time.

If regular season wins mean anything, DeRozan is already up 2-0 against LeBron this season.

Will the Spurs do better than the Raptors at the end of the season? Will the Spurs win another NBA title with DeRozan on board? Leave a comment and let us know what you think.