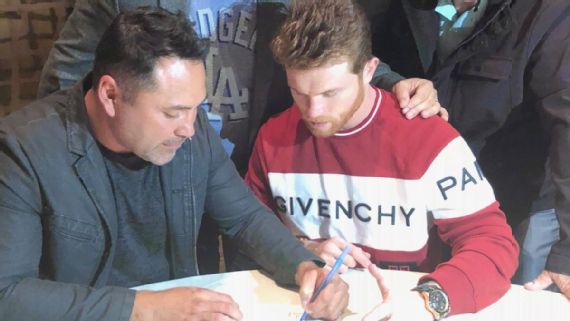 Boxer Canelo Alvarez is now the record holder for the biggest contract in history for an athlete.

The unified middleweight world champion has signed an 11-fight deal with DAZN. The contract is worth $365 million over the course of five years.


Filling in the void

The sport of Boxing has found a home in streaming service DAZN after HBO announced that they were getting out of the fight business.

The company has put their fate in Canelo that he will be able to return their investment in him at a subscription price of $9.99 per month. That is significantly cheaper compared to the $80 that HBO and Showtime charges for per Canelo fight.

A DAZN subscription will only cost $119.88 a year and this not only includes Canelo fights, but also high profile names such as Boxing Heavyweight champion Anthony Joshua.

Canelo's new contract surpasses the previous record held by Baseball player Giancarlo Stanton when he signed a 13-year, $325 million deal with the Miami Marlins in 2014. Stanton now plays for the New York Giants.

In an interview with ESPN, Canelo said that "this is only from my hard work." Furthermore, he said that the most important thing is to have fans see him fight without having to pay a lot, and give the fans the biggest fights.

Even Canelo's promoter Oscar De La Hoya couldn't hold his joy as he told ESPN that "Canelo is the highest-paid athlete in the world. He's extremely happy."

What's next for Canelo?

Canelo will make a move to super middleweight for the first fight under his new contract as he faces Rocky Fielding on December 15 in New York.

He looks to make a huge draw both in Streaming Service buys and ticket sales in the hopes of selling out Madison Square Garden.

Asked about DAZN making a huge risk, Canelo said that "I'm happy that we're moving forward and that I will be able to fight on a platform that is the future." He also thanked HBO and Showtime for helping boost his career.

With his trust in his own ability, Canelo is confident that DAZN will succeed through him.

Did DAZN make the right choice to make Canelo Alvarez the highest paid athlete? Will Canelo be able to deliver on his promise? Let us now what you think.