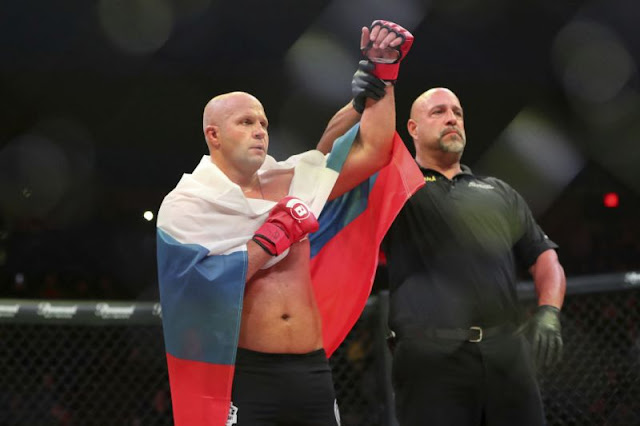 Fedor Emelianenko turned back the hands of time as he stopped Chael Sonnen in the first round of their Bellator 208 matchup.

Fedor, who is competing in another grand prix in his career, finished Sonnen with his usual ground and pound in the first round.

He now advances to the finals of the Bellator Heavyweight Grand Prix tournament.


Turning back the hands of time

Fedor is well past his prime when he was considered the greatest MMA fighter in the world but he turned back the hands of time with a performance, reminiscent of his days fighting under Pride FC.

"The Last Emperor" was again tested as he was taken down to the ground early, after Sonnen recovered from being dropped early in the round.

Sonnen took Emelianenko down multiple times but was unable to gain full control as it turned into a scrap on the mat.

Emelianenko managed to escape and both fighters are back on the feet. He once again dropped Sonnen with a short left this time.

A grounded Sonnen had no answer as Emelianenko landed some heavy ground and pound, leaving him with no choice but to turtle up.

This prompted Dan Miragliotta to stop the fight at 4:46 in the first round.

Sonnen had nothing but respect for Emelianenko after the fight.

"He was fast, and very powerful. He looked like he looked when I watched him on TV. I was impressed," Sonnen said after the fight.

Fedor will now take on Ryan Bader in the finals of the Bellator Heavyweight Grand Prix Tournament. The finals will take place on January 26 at The Forum in Inglewood, California.

Bader has been undefeated ever since he made his Bellator debut. The Bellator Light Heavyweight champion made a successful debut at heavyweight when he beat Muhammad "King Mo" Lawal via TKO at Bellator 199.

He followed that up with a Unanimous Decision win over Matt Mitrione at Bellator 207, en-route to the eventual matchup with Fedor in the finals of the Heavyweight Grand Prix.

Both Fedor and Bader are heavy handed which will make things interesting on their feet.

On the ground, it will be intriguing as to whether it will be Bader imposing his dominance with his wrestling, or Fedor turning it into another scrap on the ground

Either way, Sonnen suggests that "He [Fedor] and Bader is going to be a great fight."

How will you rate Fedor Emelianenko's recent performance? Who will win the Bellator Heavyweight Grand Prix final? Leave a comment and let us know your thoughts.