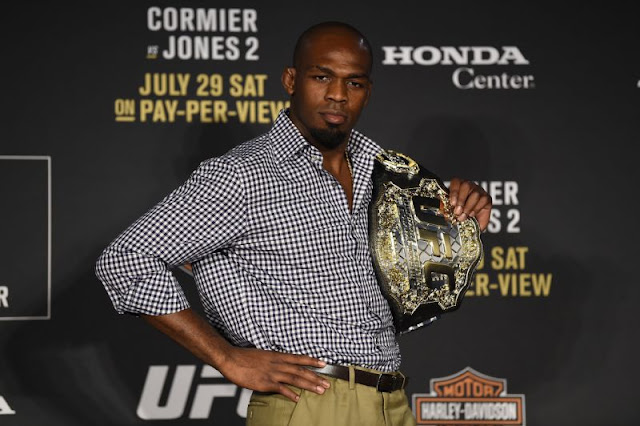 An arbitrator in his anti-doping case has cleared him of taking banned substances intentionally prior to his title fight with Daniel Cormier back in 2017. This now reduces his suspension from 15 months to later this year.

Jones will be eligible to fight again effective October 28, 2018.

Traces of the substance were found in a urine sample obtained from Jones in a random drug test performed a day before his scheduled title fight with Cormier at UFC 214. Jones' manager Malki Kawa said that he had "no clue" how the substance got into his client's system.

"It is stipulated that the athlete took a number of steps following his first anti-doping policy violation to minimize the risk of committing a second," McLaren wrote. Furthermore, he indicated that Jones took the necessary precautions such as hiring a nutritionist and consulting with the UFC Director of Athlete Health and Safety.

Jones spoke about the news in an Instagram post, thanking those who stood by him as the case was ongoing.

Jones has beaten current champion Cormier for the title on multiple occasions before having to deal with issues on separate occasions. The UFC Light Heavyweight division rankings have plenty of new names but familiar foes sit atop.

Alexander Gustafsson is ranked no.1 in the division and is the last fighter to pose a challenge to the former champion. A rematch would be interesting in Jones' return fight as he works his way back into another title fight.

Another possibility is a move to Heavyweight, which has been talked about in the past. Jones' will not have that much problem cutting weight since he usually walks and trains above 205 lbs before preparing for the weight cut.

Incidentally, Cormier is the champion of that division as well, which makes it interesting to see if he can do better against Jones at his original division.

Who do you want Jon Jones to face in his return fight? Will he move to Heavyweight? Let us know your thoughts.