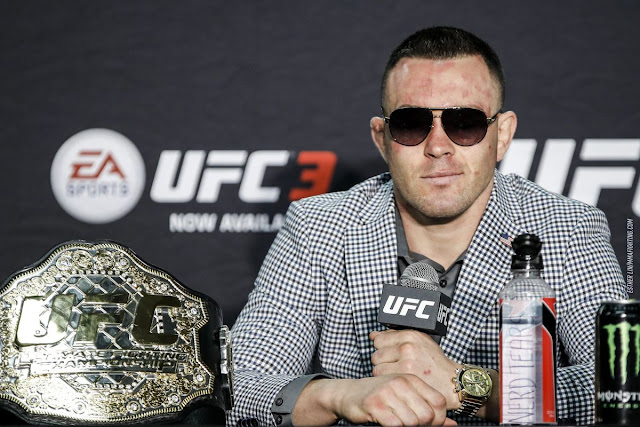 Colby Covington did not waste any time and threw himself right into the mix right after his rival Tyron Woodley successfully defended his Welterweight title at UFC 228.

Woodley was fresh off a 2nd round submission victory against Darren Till when Covington came out swinging with a challenge. The former interim welterweight champion has a date and place in mind...

Covington's reign as the interim champion was taken away from him for failure to defend his title in unification bout due to a recent surgery. He was officially stripped of the interim Welterweight Championship the moment Woodley vs Till went underway.

Prior to Saturday's title fight however, UFC President Dana White promised Covington that he will be next in line for a title opportunity. He now knows who he is going to face and it is the match he has always been asking for.

The former interim champion took to Twitter his challenge saying:

"@Twooodley Tyrone! You didn't blow it!!! Time for you to come to see me in @TheGarden. America's champ has another promise to keep."

Woodley vs Covington in MSG?

Covington is eyeing Madison Square Garden for his title fight with Woodley. Yoel Romero and Paulo Costa were scheduled to headline the fight until Romero had to pull out due to doctor's advice.

Throwing Woodley into another title fight barely a month after this one might not be a good idea for the champion. There is the possibility that Covington is picking a convenient date where he has a better chance of winning the title.

Woodley has stated in the past however that he isn't willing to fight anyone without going through a full camp. Whether he gets booked to headline MSG in November or they hold the fight for another date, one thing is for sure...

Woodley vs Covington is definitely going to sell tickets if they continue beefing with each other on interviews.

Will it be too soon to put Woodley in a title fight once again? Will he be willing to face Covington shall the UFC suggest? Let us know your thoughts.