Russel Westbrook Out for a Month After Knee Surgery 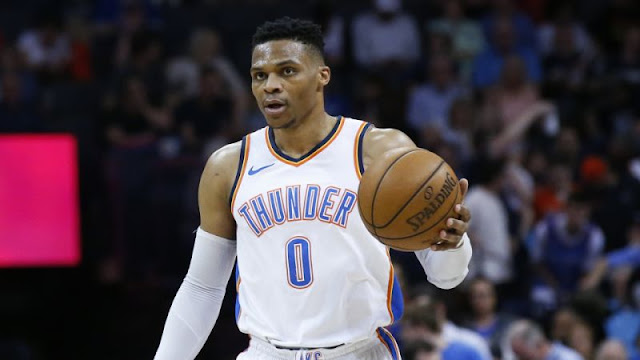 Oklahoma City Thunder fans receive some scary news as the team announced that Russell Westbrook had undergone arthroscopic surgery on his right knee on Wednesday.

According to the team, Westbrook went through surgery just for "maintenance" and nothing serious. Fans will have to wait as Westbrook will be re-evaluated in four weeks.


What is the cause?

It will be remembered that Westbrook tore his meniscus in the 2013 Playoffs after Patrick Beverley crashed into Westbrook's knee in the first round of their series.

This caused him to miss the entire series, where the Thunder still managed to eliminate the Houston Rockets before bowing down to the Memphis Grizzlies in the second round. Westbrook also missed the first few games of the season that followed.

Westbrook is going to be re-evaluated in a month, which means that he may miss the entire preseason, as well as the first few games of the regular season.

The layoff is quite similar to the previous one as the Thunder said in their official release that "the best course of action was the proactive procedure."

What this means for Oklahoma City

It is a small price to pay for the Oklahoma City Thunder to have Westbrook undergo the procedure at the expense of a few games, rather than having their star endure some lingering pain the entire season.

Royce Young of ESPN noted that Westbrook's surgery was the first in four and a half years after having three surgeries in 2013 alone. He became fine after that and even managed to rack up accolades in statistics and in individual records.

It will be a huge loss for the Thunder to have Westbrook on a decline in those five years if they risk having their star power through, especially with his style of play.

The Thunder re-signed Paul George, who has proven in the past that he can carry a team to a winning record on his own which is why there is not much to worry about.

For all Thunder fans out there, lets just hope that Westbrook is fine and would return for another triple-double season.

Will Russell Westbrook come back stronger like he did in the past? How long till we see him on the court again? Tell us your thoughts.