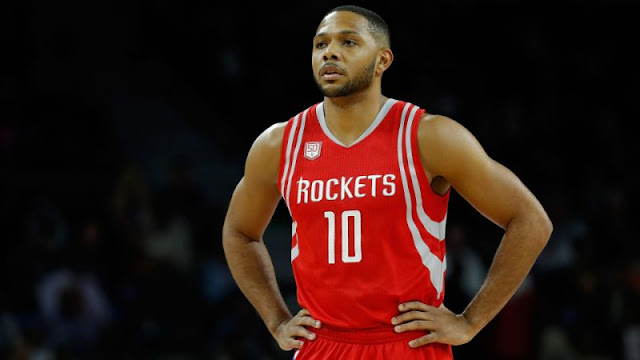 The long list of key players turning down contract extensions go on and on. Houston Rockets guard Eric Gordon joins the list as he reportedly turned one down as well.

Unlike others who seek greener pastures, Gordon happens to like playing with the Rockets  according to Jonathan Feigen of the Houston Chronicle. Key Players have been rejecting generous offers from their respective teams such as Kyrie Irving, Jimmy Butler, Klay Thompson, and even Tobias Harris.

In Gordon's case he said that he even is willing to be in Houston for the rest of his career.

The Rockets made a splash this offseason by matching offer sheets in order to retain the services of Swiss big man Clint Capela while picking up Carmelo Anthony off waivers in a bargain deal of $2.4 million.

Capela's $90 million contract extension kicking in plus Anthony's salary, the Rockets are currently over the salary cap, which means they can only offer Gordon as much whereas if he were a free agent, they can bump the offer up to a 120 percent more than his current deal.

This allows Gordon to receive at least $28 million a year for the next three to four years shall he go into free agency. Gordon is happy to be part of the Rockets organization but right now, money talks.

Is Gordon worth a big payday?

Gordon averaged 18 points per game last season coming off the bench for the Rockets. He is able to produce the same output for the Rockets as he did as a first option playing for the Los Angeles Clippers and the New Orleans Pelicans.

At 29 years old, Gordon is fairly young but already in the middle of his prime years. With Anthony definitely getting more touches behind James Harden and Chris Paul, Gordon wouldn't pick up that much mileage on his body for at least a season long.

This means that a fresh contract for Gordon for the next few seasons after this still going to be worth it from a production standpoint. All he has to do is continue putting up numbers despite being bumped down in touches.

So is Gordon worth a big payday? It depends.

Did Eric Gordon make a good decision turning down a contract extension? How good will he be playing this coming 2018-2019 NBA season? Let us know your thoughts.