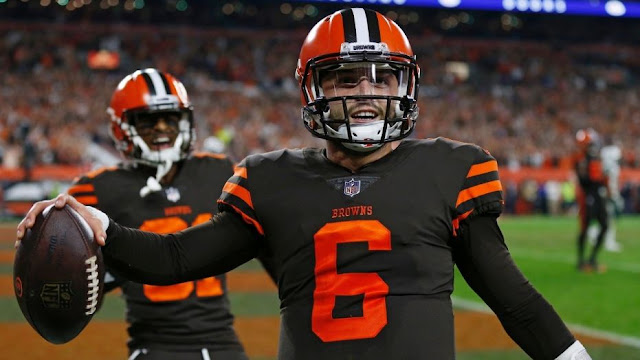 The Cleveland Browns ended a two-year as they scored their first win in 635 days, defeating the New York Jets Thursday Night.

Cleveland trailed 14-0 as they were approaching halftime when rookie quarterback Baker Mayfield came in to replace an injured Tyron Taylor with just under two minutes before they hit the dugout.

The No. 1 overall pick in this year's NFL Draft went on to lead the Browns to victory 21-17.

Jets running back Isaiah Cromwell had two touchdown runs as his team set distance with a 14-0 lead as they were approaching the half.

The Browns seem to have accepted their fate as they were down two touchdowns when starting quarterback Taylor suffered a concussion.

This gave Mayfield the chance to prove why he is the top pick in the draft, leading four scoring drives and completing 17 of 23 passes for 201 yards. Mayfield did it in just a little over a half of play.

Browns running back Carlos Hyde scored two times from 1 yard to help seal the deal for his team, who hasn't won a game since December of 2016.

Sam Darnold, the Jets' rookie quarterback had a chance to win the game with 11 seconds left but ended up throwing an interception.

Cleveland Browns fans have suffered heartbreak after heartbreak as the team was on a 19-game losing streak consisting of blowouts and close games.

The Browns have been riding on the second longest losing streak in history since the AFL and NFL merged in 1970.

Incidentally, the Browns passed on Darnold, who eventually ended up with the Jets. They may have made the right decision to go with Mayfield however if this win would be the sole basis.

Browns coach Hue Jackson now has two wins in as much as 35 games with the team, which pressures him to deliver as team owners Dee and Jimmy Haslam has put their faith in him.

Now that some of the pressure has been eased with their recent win, Jackson is now faced with the dilemma of either starting with Taylor again when he returns, or ride Mayfield all along for the rest of the season.

As Mayfield had shown what he can do in is supposed to be his "watch and learn" season, it seems like Cleveland will be fine riding him all season and allow Taylor to make a full and complete recovery instead.

After that, then decisions must be rendered.


How do you feel that the Cleveland Browns have finally won?  Should Baker Mayfield be the de facto starting quarterback of the team? Tell us know your thoughts.