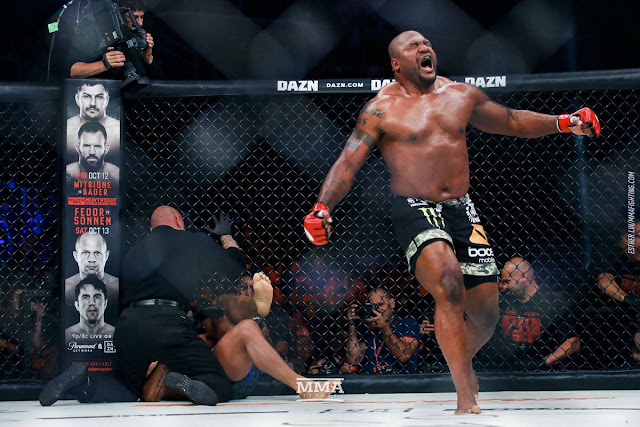 Quinton "Rampage" Jackson evens the score as he defeats longtime rival Wanderlei Silva at Bellator 206 on Saturday. Jackson won via Technical Knock Out at 4:32 in the second round.

The two MMA titans met for the fourth time, having fought on three major promotions around the world. They have been at it since both were in their prime days fighting in Japan under the PrideFC banner.


A lot of history between the two

The first time Jackson and Silva met was at PrideFC in 2003. Silva, who was violently knocking people out here and there met a young and powerful Rampage Jackson.

Silva utilized knee strikes to put out Jackson in the first round. The exact same result happened as Silva scored yet another win in their rematch in 2004.

The third meeting between the two took place in 2008, when both fighters are now under the UFC banner. Jackson would exact his revenge as he knocks Silva out cold in the first round at UFC 92.

A series of finishes made a lot of history and beef between the two icons.

Another chapter was written in the history books as Jackson was in search for the equalizer against Silva. He now has another chance at Bellator 206.

In the first round a rather cautious Silva suddenly went on his usual reckless abandon but Jackson engages. Both fighters were swinging wildly with Jackson seeming to land the more significant strikes.

The two continued to trade shots in the second round but Silva appeared to be breathing deeply as Jackson closed the distance. Jackson then lands a right to Silva's chin which dropped the "Axe Murderer" as Jackson continued to throw punches until Silva could no longer intelligently defend.

Referee Mike Beltran stops the fight at 4:32 in the second round, awarding Jackson with a TKO victory. Rampage now evens the score at 2-2.

Should there be a 5th and deciding match? Is Wanderlei Silva way past his prime? What's next for Rampage? Let us know your thoughts.