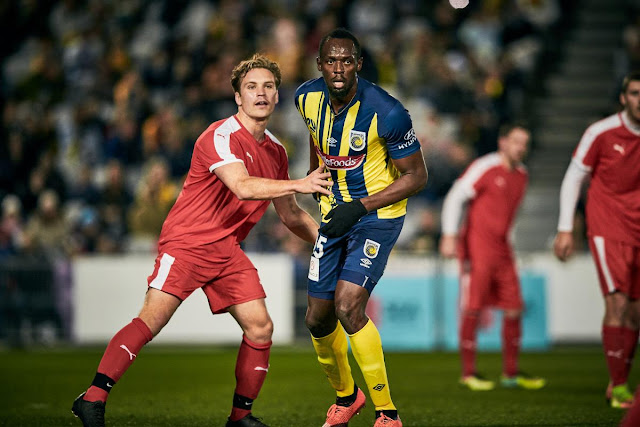 The 32-year old Jamaican, arguably the greatest sprinter of all time, has taken his speed to another sport he loves which is Soccer. He is now playing in the Hyundai A-League, the top soccer league in Australia.

It will be remembered that Bolt retired from track and field after suffering a hamstring injury at the IAAF World Championships last year.

Bolt entered the at the 71st minute in a game that has already been decided. The Mariners were up 6-0 versus the Central Coast Select in a preseason friendly.

He wore the number 95 to pay homage to his world record time of 9.58 seconds in the 100-meter sprint. He managed seven possessions and a shot in 19-minutes of play.

A crowd of almost 10,000 people gave the former Olympian a loud ovation as he entered the pitch and made his position at the left wing.

In an interview Bolt said that "I was a bit nervous, but as soon as I got on the field I think the nerves kind of went. I wish I had more touches but I'm not fit yet." Furthermore, he said he needs two months more to get to the shape he has to be for a soccer game.

Also, he indicated that it will take twice the time in order to familiarize himself more with the team in which he termed "playing like the guys".

Can Bolt save the Mariners?

The Mariners finished 10th in the A-League last season. They were in last place, with 4 wins, 15 losses, and 8 draws.

Despite placing at the cellar of the standings, Bolt believes that the Mariners will manage to improve overtime. He said that it was a great feeling and a wonderful moment and that he is just happy to be there playing professionally.

Can he save the Mariners? Not immediately but Bolt agrees that having him on tape can certainly help the coaching staff see areas for improvement.

Can Usain Bolt replicate his track and field success on the pitch? Will the Central Coast Mariners become better with him on the team? Let us know your thoughts.