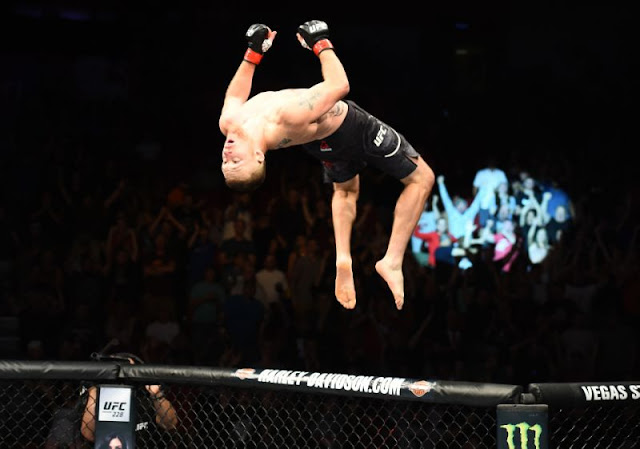 UFC Lightweight Justin Gaethje one again lived up to his nickname as he finished no. 10 ranked James Vick in the first round of the main even of UFC Fight Night.

The man who calls himself "The Highlight" made use of forward pressure and precision striking to dispose of his rival. Looking to bounce back from two straight knockout losses, Gaethje looked to be more calculated this time as opposed the usual invitation to engage in a toe-to-toe slugfest.

Gaethje lived up to his word as he closed in the distance against a taller Vick. He intended to finish the fight early as he placed all his weight on a left hook that hit Vick clean on the chin, followed with a heavier right hand that ended the night for Vick.

The referee noticed an already unconscious Vick as he stopped Gaethje from inflicting further damage at the 1:27 mark of the first round.


The most exciting fighter

Gaethje is starting to earn the reputation as one of MMA's most exciting fighters. He has won "Fight of the Night" in his first three fights in the UFC for his exciting performances against Michael Johnson, Eddie Alvarez, and Dustin Poirier respectively.

The only thing that stopped "The Highlight" from earning a fourth straight FOTN award is his quick work of Vick. Gaethje however won "Performance of the Night" and took home a $50,000 bonus as an extra for his spectacular knockout.

At 29, Gaethje is only hitting his prime and will only get better if he continues to grow as a UFC fighter.

In his post fight interview, Gaethje called out no.2 ranked Lightweight Tony Ferguson saying that he would love to fight "El Cucuy". In between the two are Poirier and Alvarez, who he suffered two straight losses to prior to Saturday.

Above Gaethje sits Kevin Lee and Edson Barboza at no. 5 and 6 respectively. Both of them also pose a challenge for Gaethje and would definitely be a spectacle to watch as well.

With the fight between Lightweight champion Khabib Nurmagomedov and Conor McGregor set to happen at UFC 229, Gaethje will have to wait and see how the rankings play out to see where he stands in the lightweight division.

From Gaethje's rank at no.7 all the way up to the champion, one thing is for sure... His next fight is definitely going to be another exciting one.

Who do you want to see Justin Gaethje face next? Is he ready for another title fight? Let us know what you think.