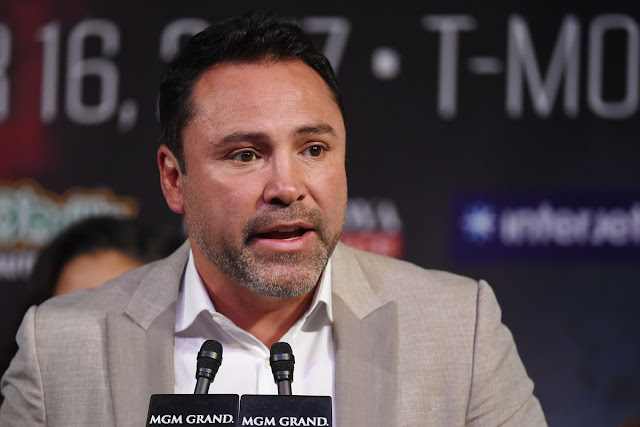 Golden Boy CEO Oscar De La Hoya stated in an interview that he does not like the way Mixed Martial Arts fighters are being paid. The former world champion, now a promoter looks to give MMA fighters what he thinks they deserve.

In an interview with Fight Hub TV, De La Hoya said that "I'm really looking forward to getting into the MMA world and making sure that these fighters are being compensated well." Furthermore, he said that fighters should be compensated more for risking their lives in the ring.

Golden Boy Promotions has been promoting boxing events since 2002. The company made its first attempt to promote MMA fights when they partnered up with Affliction Clothing.

The promotion had big names outside the UFC. Fighters such as Fedor Emelianenko, Aleksander Emelianenko, Andrei Arlovski, Josh Barnett, and Gilbert Yvel were some of the prominent names to be featured.

The promotion folded less than a year after the cancellation of its third event due to a steroid scandal.

De La Hoya wants to start promoting MMA again as he promotes a third fight between UFC Hall of Famers Chuck Liddell and Tito Ortiz. The two have already retired from the sport until De La Hoya convinced them to have one more fight.

"I'm going to start Golden Boy MMA for a reason, and it's going to start with Chuck Liddell and Tito Ortiz to pay them correctly, to pay them what they deserve." De La Hoya also stated how it gets him sick to his stomach when he hears how much MMA fighters get paid.

There is no specific date or a full card made at the moment but De La Hoya plans to have it later this year.

Will Golden Boy MMA be the future of MMA? Should Chuck Liddell and Tito Ortiz headline this card? Let us know your thoughts.