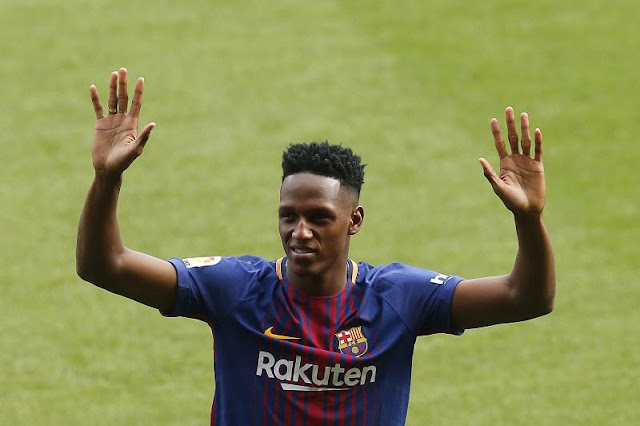 Mina is now going to the Premier League for a transfer fee of €30.25 million (£27.16 million). The deal also includes an additional €1.5 million in bonuses, as well as a buyback clause.

This is a second time that a player has been shipped from Camp Nou to Goodison Park. Everton also signed Lucas Digne for £18 million back in August.

Coincidentally, both Mina and DIgne play as defenders for Barcelona.

It may have been too early to let go of the 23-year old, especially after a good showing for Colombia at the World Cup. Mina was considered the best defender in Brazil when he came to Barcelona from Palmeiras in January of 2018.

It was a logjam on the defensive formation anyway with Gerard Pique and Samuel Umiti already the primary option. Thomas Vermaelen was also above Mina in the rotation.

It wasn't like Mina wasn't given a chance however as a quarter of the 29 goals that the team conceded were spread over the three games that Mina was fielded in.

It isn't a guarantee though that Barcelona will concede lesser goals this season but Mina's inefficiency highly reflects in his short stint with the team.

What Mina's arrival means for Everton

Mina is now headed for the Premier League, a league that probably has the world's best defenders on each team. This will give him a chance to redeem his woes at Camp Nou.

He will be backing up team captain Phil Jagielka though as they both play the centre-back position. He will also be playing alongside Digne, who he was teammates with at Barcelona.

Everton can now start shifting to a more defensive setup, following the departure of Wayne Rooney to D.C. United.

Will Yerry Mina bounce back from an unimpressive first half in team competition? Will Everton perform better this season? Let us know your thoughts