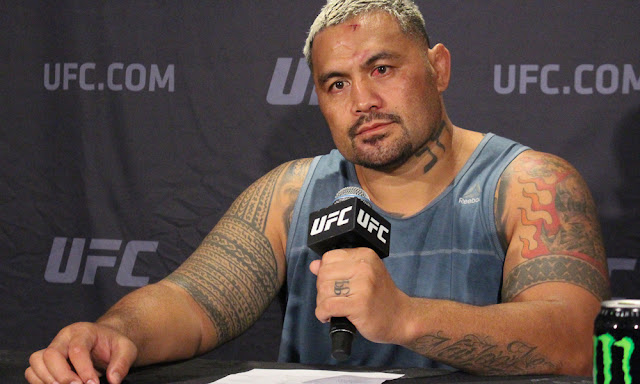 Former UFC Heavyweight Champion Brock Lesnar has been making appearances for the UFC as of late. He was cageside at UFC 226 to witness Daniel Cormier win the heavyweight title after knocking out Stipe Miocic.
Cormier would then issue a challenge to Brock Lesnar, who has not been active both in Professional Wrestling and MMA as of late. A scuffle ensued which only strengthens the buildup to a potential fight.
UFC president Dana White confirmed that they are looking to book Cormier vs Lesnar for a potential title fight.

Lesnar is still awaiting trial as he re-entered the USADA drug-testing pool last July 3. This is part of a requirement in order to finish out his 2016 suspension, which was frozen when he removed himself from the drug-testing pool.

Once cleared, Lesnar will be eligible to fight in the UFC again on January 8, 2019.

It will be remembered that UFC Heavyweight Mark Hunt filed lawsuits against the UFC, Lesnar, and White respectively. This came after Lesnar tested positive for performance-enhancing drugs ahead of their fight at UFC 200.

In the lawsuit, he claimed that all three parties in the lawsuit were allegedly knowledgeable about Lesnar's use of performance enhancers but still proceeded to let him compete. Furthermore, Hunt indicated that hunt was physically and financially damaged by the alleged conspiracy.

Lesnar was fined $250,000 by the Nevada State Athletic Commission, including a one-year suspension for the incident. His win against Hunt was overturned into a no-contest as well.

Hunt's Lawyer Christina Denning is considering amendment with regards to the lawsuit. She indicated that Lesnar's budding return and potential title shot could bolster her client's case.

In the initial complaint, Denning stated that “Lesnar, White, and UFC acted in concert as set forth fully above, to defraud and commit a battery against her client. Furthermore, she stated that they they debated whether or not to alter the complaint in order to add more facts.

Denning’s initial amended complaint was filed back in June 2017.

What this means for the UFC

While there is no substantial evidence yet regarding the issue, this will be a huge blow to the UFC shall this be proven true. This is not the first time that the UFC has to deal with such controversy however.

Lesnar still continues to be a huge draw which will only set them back in terms of numbers but hopefully not the company's credibility. Whether or not Hunt does amend the lawsuit remains to be seen.

A far as the UFC goes, Cormer vs Lesnar is still a go once Lesnar eligible to compete again.

Will Mark Hunt succeed in his legal battle against Lesnar, White, and the UFC? Let us know your thoughts.