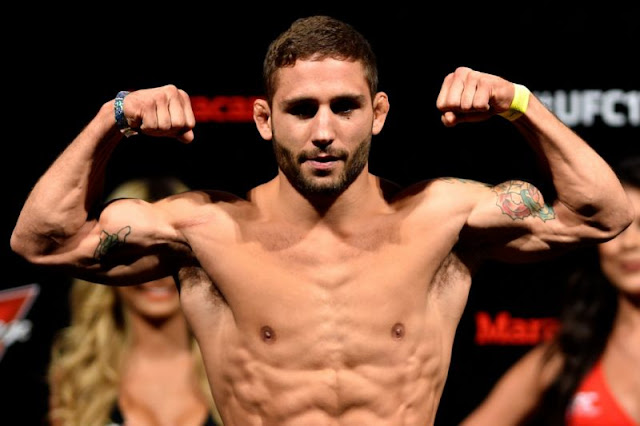 UFC Featherweight Chad Mendes had a lot of time to think and to focus on personal matters in his time away from the Octagon. This comes at the light of a failed anti-doping test after losing to Frankie Edgar via Knock Out at The Ultimate Fighter Season 22 Finale.

According to Mendes, he had subsequently asked for time off after the Edgar fight. His two-year suspension came at an opportune time since he was indeed planning to be on the sidelines for the time being.

In his time off, Mendes was not only able to focus on his adventure tour business which he runs with a friend, but also gave his body a chance to recuperate. Mendes said that he needed to give his body a much-needed break since he has been going at it nonstop since the age of 5

He has been grinding it out without any long layoffs from Amateur Wrestling up to his Pro MMA Career. Mendes also said that hid body feels great after giving it some time to recover.

It will be almost three years since Chad Mendes has entered a UFC Octagon. He served a two year suspension after being flagged by the US Anti-Doping Agency (USADA) for having growth hormone-releasing Hexapeptide or GHRP-6 in his system.

Mendes did not deny the use of the substance which was found in his urine. Furthermore, he explained that it was from a cream that somebody recommended to treat his Plaque Psoriasis, a skin condition which causes patching and dryness leading up to itching and irritation.

Though he did not contest to the charges and owned up to it stating that he was also to blame for not looking into it further before proceeding to use the cream.

Although he wasn't trying to gain a competitive advantage for using the performance enhancer, it still cost Mendes two years of his MMA career.

Right now, Mendes does not want to dwell on the losses but rather on the task at hand. He will be facing Myles Jury at UFC Fight Night 133 this Saturday at the CenturyLink Arena in Boise,Idaho.

He is 17-4 in his MMA career with all four losses coming from former UFC champions. One of those losses came at the hands of Conor McGregor, who he fought on very short notice.

He almost won the McGregor fight, which was for the UFC Featherweight title but fatigue caught up with Mendes later in that fight. He got knocked out in his next outing against Edgar, which prompted him to take some time off.

"I’ve never, ever taken a break and right there at the end, my body was starting to feel it. It was three hard fights I fought that year. Two of them didn’t go my way and both of them rung my bell a bit, so ultimately, I had already told the UFC I wanted to take a year off to let my head heal and my body heal and hopefully get that hunger back. Honestly, it was me kind of going through the motions right there at the end," Mendes said.

Mendes credits the fact that he enjoys the whole journey as he can make money for the things he loves such as outdoor activities and his MMA pursuits. At this point, a UFC belt would be the icing on the cake for his resume.

In a way, then, Mendes is back to where he was in 2008, when he turned pro and was eager to make his mark in MMA. The only advantage is that this time he’s a lot smarter with a lot more experience.
He will have a tough task at hand as Jury is no slouch both on the feet and on he ground. Mendes will be taking with him a clearer mind as he returns a better man after all his setbacks.