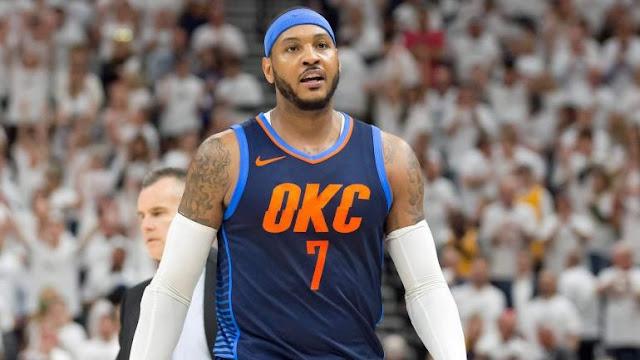 Carmelo Anthony has one whirlwind of an NBA offseason after being traded from the Oklahoma City Thunder to the Atlanta Hawks. Reports now state that All-Star forward is planning to sign a one-year, $2.4 million contract with the Houston Rockets once released by the Hawks.

He is now set to clear waivers following his trade in order to finalise the move to Houston.

A not so sure deal yet

Nothing is official yet until Anthony signs a contract. There is the possibility that he will either be withheld by Atlanta, or he signs with another team once cleared.

According to Marc Stein of the New York Times,"Rockets officials have been operating under the strong belief that Anthony will soon be Houston-bound." Also, the three-way trade which sent him to Atlanta is not official yet as of now and will take a few days to do so.

If all things fall according to plan, Melo is expected to sign with Houston as verbally committed.

Will Melo agree to a significantly reduced role?

There is no doubt that Melo wouldn't be expected to produce the way he did with the Denver Nuggets and New York Knicks. He should have realised this by now after playing a season as a third option in Oklahoma City.

His 16.2 points per game average during the 2017-18 season was a career low for hima career-low for him. He also shot a career-worst 40.4 percent from the field across 78 appearances with the Thunder.
Reigning MVP James Harden will be the man in Houston for a long time while Chris Paul will still be expected to do double duty both in facilitating and scoring.

The Rockets will continue to sacrifice defense for offense as Melo will be filling into the vacancy that Trevor Ariza left when he signed with the Phoenix Suns. That leaves him and P.J. Tucker on the main rotation at the Small Forward spot.

When asked about potentially teaming up with Melo in Houston, Harden said "It would be a great acquisition for us." Furthermore, he said that "Melo's a proven vet. He just wants to win at this point, so it would be great for him to be on our team. The current roster we have now, we've got good guys back and we keep making forward progress."


What Carmelo Anthony means for the Rockets

Offensive firepower is one. He would be a potent addition to a lineup that already features Joe Johnson, Eric Gordon, Gerald Green, Ryan Anderson, Tucker, Paul, and Harden. Their defense will suffer though having just Clint Capela and Tucker as anchors but the three-point attempts that this lineup is going to have can possibly be a threat to opposing teams when they are hitting.

Melo seemed to have a hard time adjusting to a reduced role in Oklahoma City but if he finally accepts it when he signs with Houston, he will definitely be the most efficient he has been in quite some time.

Do you think Melo will be a good fit in Houston? Let us know how you feel about this possible signing.