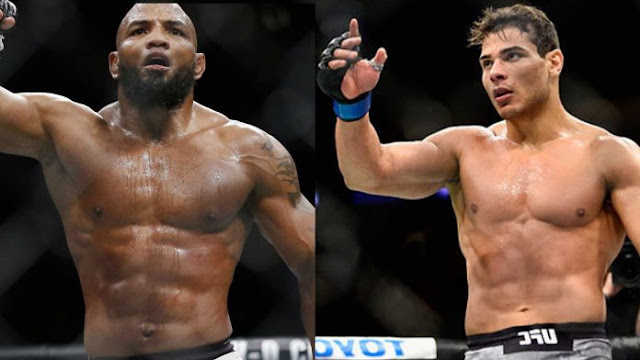 Beefing up the card

The UFC 230 card is beefing up with another matchup in the Middleweight Division as Yoel Romero takes on TUF Brazil alumnus Paulo Costa. The fight is set to happen on November 3 at Madison Square Garden in New York.

The card has two fights scheduled so far and has no headliner as of yet. In the same card, Ronaldo "Jacare" Souza  faces David Branch in a middleweight matchup.

Costa has a 12-0 MMA record (4-0 in the UFC) with all of his wins coming by way of finish. 11 of those 12 wins are by Technical Knock Out and one being by submission.

After a lackluster stint on The Ultimate Fighter: Brazil 3 in 2014, Costa honed his craft and continued competing in his native land Brazil before he was officially signed to a UFC contract in 2017.

Costa looks to deliver the same as he faces Romero in November.

After starting his UFC stint on a hot streak which saw him finish the likes of Tim Kennedy, Lyoto Machida, Souza, and Chris Weidman respectively, Romero hit a roadblock when he lost to Robert Whittaker for the interim UFC Middleweight title.

He could have won the interim title when he knocked out Luke Rockhold at UFC 221 however, he missed weight which made him ineligible for the title. He then had another chance against Whittaker for the interim title but not only did he miss weight again, but he also lost that match via Split Decision.

Alternating a win and a loss in his last three fights may not be considered a slump just yet but since he missed the chance to hold the belt in the Rockhold fight, it seemed like Romero still lost that one.

Romero looks to add a loss to the record of Costa but first, he has to make sure he makes weight first otherwise, the UFC bosses won't be happy regardless of how convincing his win could be.

Also, lets hope he does not do some dirty tactics this time.

Expectations for this fight can only be simplified into two scenarios: one, somebody is going to get knocked out and two, both fighters slug their way to the distance.

Both Romero and Costa aren't known to have the best cardio in MMA. Both are muscle-bound knock out artists who train to keep the fights as short as possible.

Although Romero's chin has already shown to fail him in the past, while Costa has shown in his fight against Hall that he can take damage.

Costa has been improving his technique with every fight as he slowly transitions into a technical striker. Romero on the other hand still relies on explosiveness on offense which is a "high risk, high reward" thing if you are facing a guy like Costa.

Romero is a Wrestler while Costa's ground base is Brazilian Jiu Jitsu. Their ground games come fight time will boil down to who does their own better.

Both however are expected to keep the fight standing.

Yoel Romero or Paulo Costa? Who is your pick? How will the fight end? Let us know your thoughts.