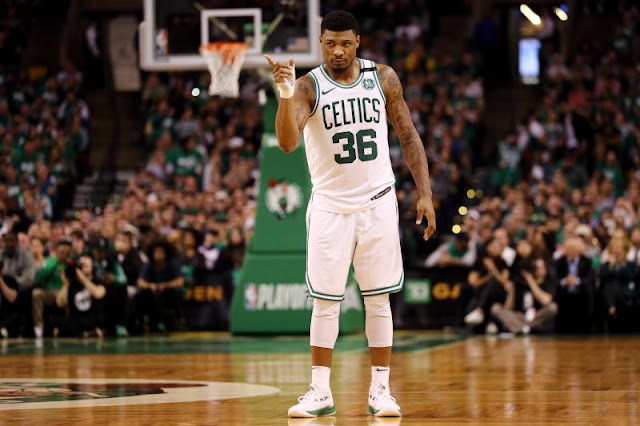 Free Agent guard Marcus Smart is staying with the Boston Celtics. According to reports, both parties agreed to terms on a new four-year, $52 million contract.

The team previously made a $6 million qualifying offer which would Smart a restricted free agent. This would have given the Celtics the right to match any offer sheet that a competing club offers shall Smart decide to sign.

What this means for the Celtics

As the Celtics' sixth pick in the 2014 NBA draft, Smart was not able to produce the same type of offense that he did in college at Oklahoma State. Playing his entire career as a back-up point guard to the stars, he has found his place as a tenacious and relentless on-ball defender

Smart's numbers on the offensive end aren't impressive at all as he averages 9.4 points per game on 36.0 percent shooting from the field. Turnovers have also been a problem for him at the point.

What Smart brings to the table however is the hustle that has been lacking in today's game. He has become the worst nightmare for ball-handlers on isolation.

He has a career average of 1.5 steals per game, which is very efficient defensively considering the minutes he is given. Basketball-Reference.com states that Smart is one of only 11 guards that has racked up at least 9.5 defensive win shares during a four-year span.

Celtics coach Brad Stevens said that watching Smart play on film shows how much he impacts the game. He being a key in a successful 2017-2018 season for the Celtics is surely the reason why they decided to retain him.

Smart will definitely be the difference in some of their games that will go the distance. His willingness to scrap and do the dirty work on the defensive end opens up more scoring opportunities for his teammates.

With Kyrie Irving and Gordon Hayward returning from injury and the core of Jayson Tatum, Jaylen Brown, and Al Horford, the Celtics can possibly be title contenders this coming season.

The team last won a title ten years ago in 2008, while their last finals appearance was in 2010 where they lost to the Lakers.

Will Marcus Smart be the wrecking ball in the title hopes of opposing teams? Leave a comment and let us know your thoughts on this signing.